Matty said:
Identifying an ignorant statement is not censorship. Making jokes regarding mental health is not the voice of conservatism. While you and I, and many other members here likely vote quite similarly, don't mistake that for an echo chamber.

As much as you post, you will invariably find yourself in a minority again on a topic...being in a group of relatively like-minded individuals, you shouldn't take offense to a differing of opinions. Take it as an opportunity to think more deeply on your stance.

I haven't seen anyone looking for an apology, but you might want to consider why you have so many posts in this thread attempting to explain why you think it is funny.

Have a good one.

DISCLAIMER: I'm not in the mental health industry, but my wife is a provider. I get a front row seat to the burden that mental health professionals bear. She is a Developmental Psychologist. On any given day she may have to deliver the news to a parent that their toddler is almost certainly going to need intensive care for the rest of their life; she may develop a intervention plan that will likely determine if a child will become a productive member of society, or potentially require some form of care for much of their life; or she is working with a young child that has been physically abused since the age of four; or possibly a young girl who is self mutilating and near suicide due to childhood sexual abuse.

She is superwoman. I don't know how she does it. She is shouldering the burden of not only her life, but all of the lives she encounters in her work day. That is a lot for anyone. So to think they may need their own support system whether professional or not, it's not a surprise...no more than a Dentist seeking another Dentist for dental work as opposed to trying to do it in the mirror.
Click to expand...

Well tell your wife she is appreciated. That's gotta be a super harsh and difficult job.

I'm not gonna apologize. It was a joke. Never have nor will I ever bash someone with a mental illness. I'v had a close friend who has ADHD my whole life. I'v had to come to his defense more than once while in school. Never regretted it. Don't place yourself on some pedestal claiming to be perfect. We've all said and done things we wish we hadn't. This insignificant thread I started isn't one of them. Long gone are the days you can joke at all I guess. Hell if a movie like Forest Gump or Rain Man were too come out now, it'd be ridiculed for making fun of people with a mental illness.

You can't be a badass and a bunny at the same time pal.

You have a good one too.

josh said:
The OP gets ribbed because he rarely posts in any threads that aren’t controversial or political,

He has also had several accounts on this forum and has had accounts banned in the past.
Click to expand...

And you rarely do anything but troll around here like Grendel, sniffing after any post you can either dissect to make yourself sound better or ridicule someone for their opinion.

CarolinaReaper said:
And you rarely do anything but troll around here like a Grendel, sniffing after any post you can either dissect to make yourself sound better or ridicule someone for their opinion.
Click to expand...

What would you call it then Josh?

Go back through at least half of my posts. You either annotated them with an emoji or couldn't help yourself from commenting in a negative light. If nothing else simply to just get a rise out of me. Because we both know you don't value my opinion. So it's simply just to troll. If you don't like me or what I post, stay out of my threads. But I honestly feel like you're incapable of doing that.

There’s a reason why you get Emmy’s for Best Forum Soap Opera.

View attachment 61523
There’s a reason why you get Emmy’s for Best Forum Soap Opera.
Click to expand...

You can shovel that crap man. I have a right to post the same as everyone else. Just because you might not like my opinion doesn't make yours any more correct.

CarolinaReaper said:
You can shovel that crap man. I have a right to post the same as everyone else. Just because you might not like my opinion doesn't make yours any more correct.
Click to expand...

You certainly have the right to be dramatic. It’s not your opinions that are being made fun of.

Contributor
I can't see how I'm the one being dramatic, if anything it's the 4 or 5 of you coming at me sideways making out like I'm monumentally and harshly bashing anyone who has a mental illness or has reached out for help. Making a mountain out of a molehill if you ask me.

But it's whatever. I'm gonna end this one here before it get's any more toxic.

CarolinaReaper said:
I can't see how I'm the one being dramatic, if anything it's the 4 or 5 of you coming at me sideways making out like I'm monumentally and harshly bashing anyone who has a mental illness or has reached out for help. Making a mountain out of a molehill if you ask me.

But it's whatever. I'm gonna end this one here before it get's any more toxic.

I don’t have a dog in this fight one way or another. Already gave my viewpoint on the therapy stuff. But you’re getting sucked in to replying , which gives someone else an opportunity to respond, and say something that’s likely gonna make you wanna respond again if it gets under your skin. The weekend is soon approaching. Cut the phone off , hit the woods , and let Mother Nature remind you how insignificant disputes on the Internet really are 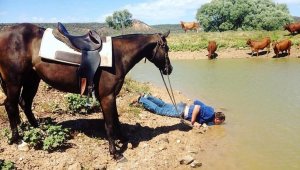 No, Sparky, posting on this forum is a privilege not a right. You’ve lost that privilege before and if I recall you’ve lost it more than once (but I may have you mistaken with some other guy who didn’t know when to just shut up and leave some things alone).
Most folks have been very civil towards you and your attitude on this thread. Me, at this point, maybe not so much.

You for sure need to grow up a little and that’s not the first time that phrase has been used towards you. You seem like the type that just has to get the last word in. You made a post making fun of people who have a difficult job. Sure you meant it to be funny, but to a large percentage of people it wasn’t funny and in bad taste. Rather than just letting it go, you have decided to take a stand and die on that hill defending your, in my opinion, tasteless attempt at humor. Honestly your pontifications on here grow tiresome.

Man up Sparky, your joke bombed, too many people here have life experiences dealing with mental illness through friends and or family members. It’s not a joke to them. That doesn’t make them snowflakes or bunnies as you like to throw those around as adjectives to describe people, it actually makes them mature adults who through life experiences have grown to be empathetic towards this topic.

Papa used to say God gave us two ears and one mouth for a reason. Maybe you should take few minutes and think about that the next time your sitting in a hotel room due to a power outage bragging about arguing with a hotel lobby attendant for 45 minutes while scouring YouTube for videos to post.

The joke wasn’t funny Sparky, get over yourself, your proving the drama queen reference to be very accurate.

You make fun of people for seeking help. Shame on you. Clearly, you have minimal life experience. I have said over and over again, we are all just one bad life event away from ending up in a psychiatric ward. Every human being has a breaking point. Realizing you need help and then seeking that help is what keeps people from becoming alcoholics, drug addicts or committing suicide.

A person is not weak, nor do you have any right to make fun of them for seeking help. Whether it be therapy, psychiatrists, minister or whoever, talking out your issues is a good thing. People who don't talk, who bottle it up inside are the ones who break.

I have used this forum as form of therapy during the pandemic. Talking about the things myself and my coworkers have experienced over the last year has helped me process many things. A close inner circle of friends is nice as well. Having someone you trust, that you know has your back and is not going to throw you under the bus is important. Not everyone has that kind of support mechanism in place.

I'm also not ashamed to say I have been to counseling/therapy a couple different times. The first time a mother throws a dead baby in your arms and screams "Help my baby, please." That sticks with you, and not in a good way. And I can't imagine how that mother feels.

In the end, who makes the decision how people should act and think?
Seems higher you go up the chain that person needs more therapy than the ones they are treating.

Our niece, the one who knows so much about firearms yet don't think she's ever fired one is
a school psychologist, two master's degrees, many years training has her own issues.
You must log in or register to reply here.
Share:
Facebook Reddit Pinterest WhatsApp Email Link
Top