Who Yall got tonight?

Yall got Georgia or Alabama tonight?

Pulling for Georgia but Bama wins.

Sadly agree. Hope that I am wrong.

Bama by 6.5+ …..I could be wrong but I think bama will dominate Georgia again I just hope Georgia keeps it close. I want a competitive game.

Contributor
I'm wrong at least 50% of the time, maybe more, but thinking Alabama's luck may run out tonight. They have used up a lot of that luck this season. I think Georgia can win it this time. (See 50% remark above.)

No skin in the game but when I worked for Deere, our offices were in Atlanta and I heard too much about Georgia at the time, this was in the Hershal Walker era...

Georgias QB looked like a deer in the headlights on that first possession.

Contributor
What’s Georgia doing in this game??
Pulling for them but they gotta get mean.

Georgia cant run the ball! Makes them one demensional.

I bet one of those Southern teams wins

Georgia has literally no excuse now…..playing a team without 2 of its top 3 players.

Anyone else having problems with ESPN? The screen went out or has been frozen most of the first half? Same for everyone I’ve talked to as well. I’m watching it on the ESPN app and it’s clear

Duckmauler dhc said:
Georgia has literally no excuse now…..playing a team without 2 of its top 3 players.
Click to expand...

Georgia QB is a joke right now. He is playing like a nervous high school qb.

Bennett finally got it together. Still a long ways to go but Georgia is in a good spot. This is an awesome game. I hate bama is without their big guns but such is life. I feel like bama would have 30+ with all their players in the game.

Contributor
Yep, as good as Alabama is, they have also been very lucky this year, and it seemed likely that luck could run out tonight.

Dawgs the best team in the country from week one, a fitting Champ

Hunker down with the Dawgs !

ETA.... congrats to @Mike Noles aka conman ...he's waited a long time for this !

GA just proved how good the sec is.

I hate it….because I hate Georgia. But they should’ve won. Alabama got some bad breaks losing their best players and it’s a testament to nick saban that they were still that close. Congrats to Georgia. I think I threw up in my mouth saying that

Maybe next year Mack will have Carolina playing on Monday night

Well I finally picked one right I kinda feel like the blind squirrel. Bama just to many injuries Ga best team most of year like see them top it off. 6 points with 1 min go in 3rd then coach finally cut them loose to take advantage of Bama one main weakness all year.

By way Ga needs enjoy this cause they ain't repeating Saban gets heisman QB back and the best defensive player in country next year good luck beating them. I see them repeating the pattern of win one lose one

Maybe Saban will choke to death on humble pie...

turkeyfoot said:
Well I finally picked one right I kinda feel like the blind squirrel. Bama just to many injuries Ga best team most of year like see them top it off. 6 points with 1 min go in 3rd then coach finally cut them loose to take advantage of Bama one main weakness all year.
Click to expand...

I watched this game while I typed out my novel. Didn't have a dawg in the fight and didn't care who won. I was sorta pulling for Georgia, but felt it was over for them once the officials called that a fumble. I thought it should have been called an incomplete pass, but I don't get paid to officiate. I also thought Georgia got the raw end of penalties the whole game comparatively. I didn't really think Alabama would lose the game, but glad I was wrong. 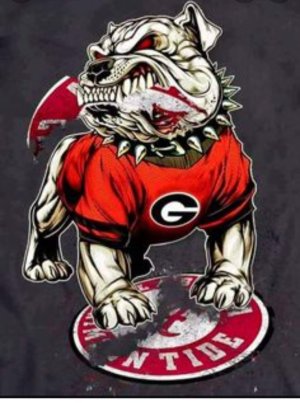