Contributor
An early supper of fresh caught croakers, asparagus dredged in flour and sauteed in butter, baked beans, and a cold Bud Lite. 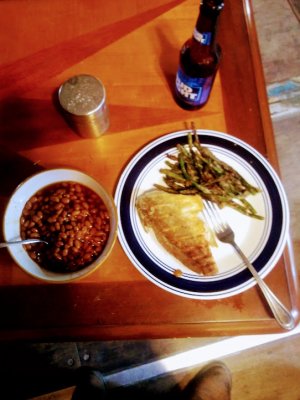 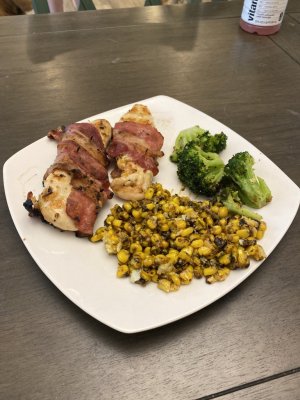 Contributor
Ribeyes at the campground with my wife. Had sweet potatoes and green beans. Got the steaks at IGA Market on 24. They were delicious. 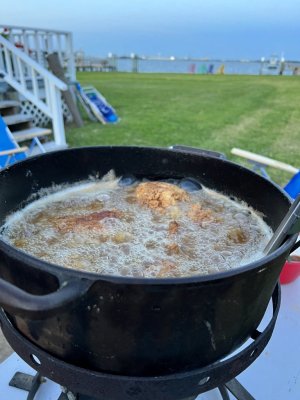 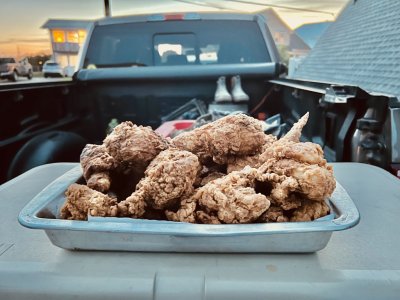 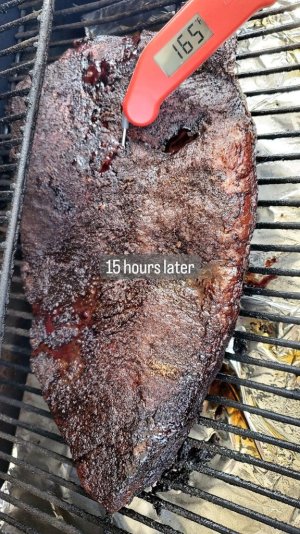 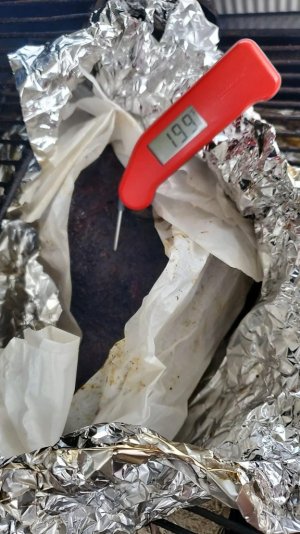 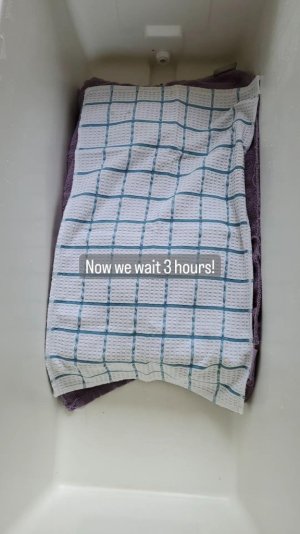 bwfarms said:
Mine must be

I'm glad you can get that price, I would like to taste the difference with me cooking it 20 hours!

mudflap said:
I'm glad you can get that price, I would like to taste the difference with me cooking it 20 hours!
Click to expand...

Evidently the happy clients think there is.

Contributor
If you never hear from me again...... 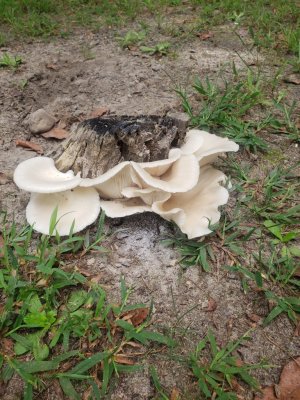 Its because I picked mushrooms from my back yard. 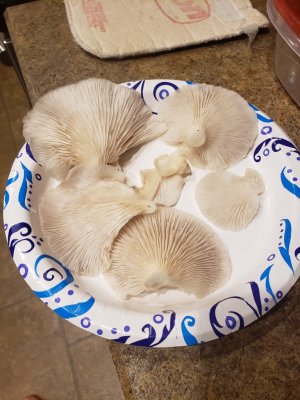 And they were delicious 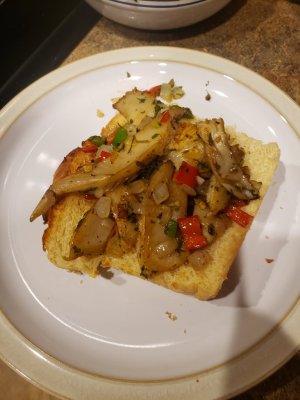 Contributor
Wife mixes the best burgers, (yes, the same one that helps me pay bills and gets to work outside the home @woodmoose

) so I had her do mine as a steak. Al dente spaghetti with fresh grated Asiago. Not bad at all I say.

Much needed freezer clean out. Different critters, different flavors. So far it's all been great. 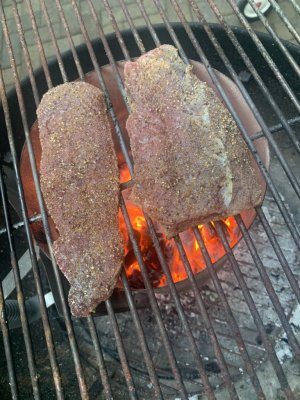 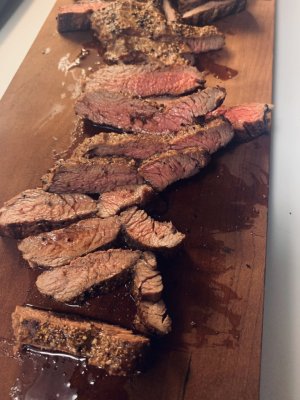 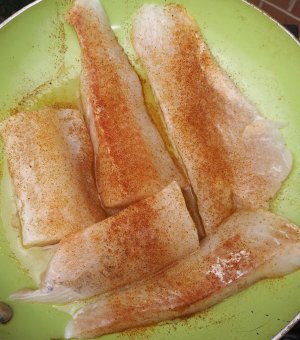 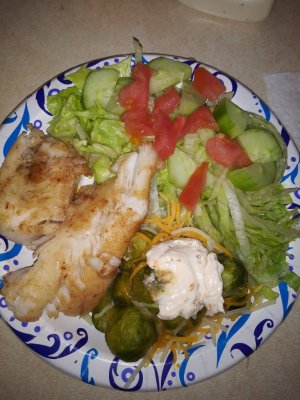 Nah they were overcooked. Not by much, still good but woulda been better redder

Have been having some extensive dental work done for the last three weeks so have been restricted to soft food so I cooked up a pot of Caldito yesterday evening and that should last me for 3 meals to come. 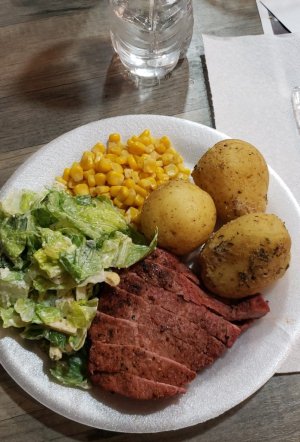 Contributor
Got some wings in the Big Chief Smoker for an hour then deep frying. Made some habenero garlic ginger honey glaze to go on them, fresh sourwood honey and peppers from the garden. Just cracked a cold beer I’m in for the day watching college football.

Drove my parents to pick up Looney Tunes...um..my sister, who lives and fits right in in Cal e fon i a

, at the Myrtle Beach International Airport. Then on to Calabash to eat at mom's favorite restaurant there. Oysters were spot on. Usually drink water, but got a sweet Arnold Palmer and water.

Forgot to add...I had 10 to 12 real nice oysters on the plate. Some were hidden by the fries. Greatly appreciated and a plug for the restaurant. 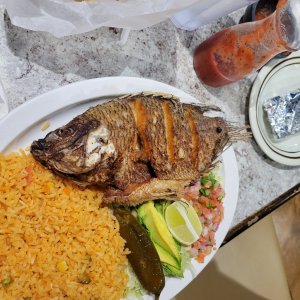 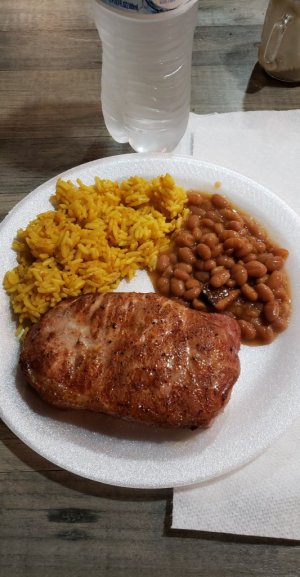 Up here in my hometown (Eastern Shore of MD). I’m still full from yesterday. Moms homemade chocolate cake w homemade peanut butter icing for breakfast. Oysters on the half shell (raw w/ Tabasco of course) and cream of crab soup for lunch, and panko encrusted rockfish(we don’t call em stripers here) in a skillet with rice and fresh veggies on the side.

Scrub said:
Made some habenero garlic ginger honey glaze to go on them, fresh sourwood honey and peppers from the garden.
Click to expand...

Can’t beat oysters I’ve found a lot lately, one of my favorite. Also found about 4lbs of Chicken of the Woods last week. 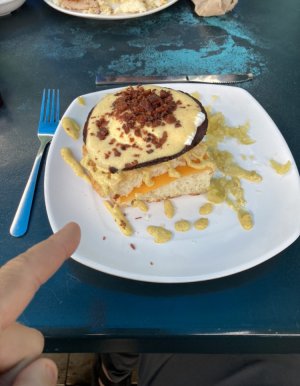 Fried balogna and egg at Biscuithead.

After opening day dove hunt, had a real nice fish fry. Forgot to take pics. Croaker, whiting, sheepshead, a little catfish, Nathan's fries, "Sandhills cole slaw"(friend now deceased came up withit), and a whole bag, minus one, of Vidalia onions quartered and fried at the end. No seasoning except salt when taken up. Things are good. But main reason for posting is sheepshead were big enough to have smoked sheepshead throats. Cajon seasoning, 300° for 28 minutes in a smoker with oak smoke. Stuff was good! They usually make fish tacos out of the smoked throats, but we just ate them as they were. That is a part normally wasted, but could can be utilized. Reminded me of blue fish cheeks. When we caught big enough blues at Core Banks, a round section between the eyes and gills was cut out, hence blue fish cheeks. It was said that was the best part of the fish. It too, would normally be wasted.
Last edited: Sep 11, 2022

Yardbird thighs, standard SPG add chili and paprika. Indirect on the Weber(~450)for an hr then a maple bourbon glaze. Nice and crispy and sticky 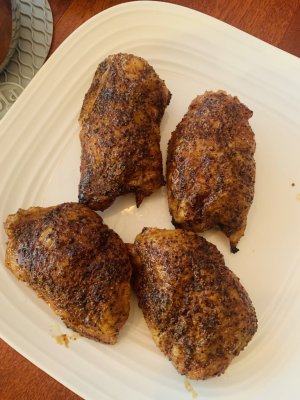 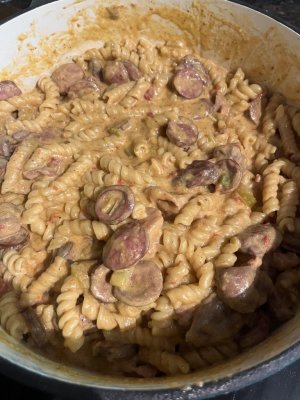