Contributor
Sometimes things do not go as planned but work out anyway. Plan A was to sit in a ladder stand overlooking a pasture but that did not work out. Neighbor has a range at the end of the pasture and they decided to burn some powder late this afternoon. I had no idea how long they would be there so I switched gears about 4:45. Stopped by the house and got me a folding seat and shooting sticks and slipped around a corner and set up with my back to a grown up fence row watching a wood line across the field. Had not been there long when I saw two bucks cruising the wood line. The smaller one came out but the bigger one stayed in the woods and I could not get a good look at him. The little one meandered off out of sight but it was not long before a doe stepped out of the woods 30 or 40 yards down the wood line from where the bucks had been.

Eyes wide open at that point, knowing there was a possible shooter buck in the area and it was not long before he stepped out a few yds from the doe. Positive id of buck #4 on the hit list and I wasted no time settling the crosshairs and squeezing the trigger. He only took a couple of steps before he went down but was thrashing a little and then I could not see him any more. I hoofed over there and he was just past the weed line in the edge of the woods.

Not where I had planned to be but it worked out anyway and I am bucked out for this season. Not the boss of the woods like the last one but a respectable 3 1/2 year old buck with a split G2. Been quite a couple days for the old man. I am blessed to be able to be active and doing what I enjoy. It has been a great season! 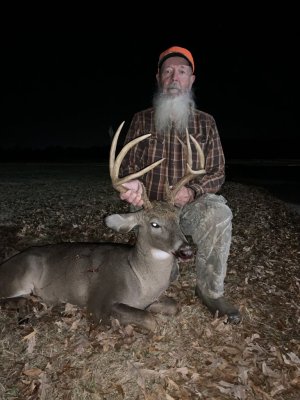 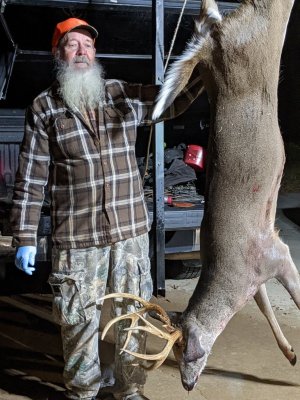 Trail cam pic of him at a scrape a few weeks ago. 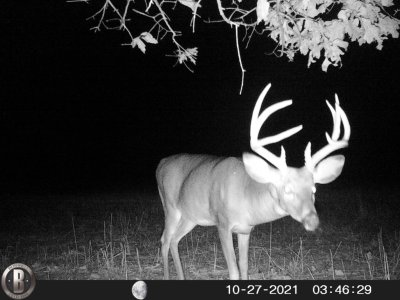 That’s awesome. Congrats and thanks for sharing.

Dang, putting a hurting on them. Good job.

Contributor
There isn’t a thing wrong with that buck.

Congrats on your buck !!

Good for you Harold! Great season!

Contributor
You’re on a roll! Great season for you guys!

#2 is in the First of the Year thread from last week! QBD2 and I are working on getting you a look at #3

Y'all have some good genetics on that place.....a deer with a rack like that on the place I hunt would be 5.5 probably.

Cool but not really necessary. I hope one of you two get it.

Congrats! You’re on a roll for sure.

Firedog said:
#2 is in the First of the Year thread from last week! QBD2 and I are working on getting you a look at #3
Click to expand...

To get 3 out of 4 of your top 4 target bucks before Thanksgiving is a great accomplishment!!!

Contributor
Dang, on a roll for sure, great season congratulations