Interesting enough... we are in CLT airport (very few here with zero line at all for TSA)

i have on a mask and took precautions BUT just found it interesting.
No TSA or airlines workers have on protective gear.

Saw and spoke with another gentleman/fellow outdoorsman here in the airport who is also traveling to TX for turkeys.

he is in the higher risk age group (60+) but said he figured mine as well go... probably safer in the turkey woods

“CDC does not recommend that people who are well wear a facemask to protect themselves from respiratory illnesses, including COVID-19. You should only wear a mask if a healthcare professional recommends it. A facemask should be used by people who have COVID-19 and are showing symptoms.”
Click to expand...

It's actually worse for you if you do wear a mask. Proper handwashing and sanitation is key here....

Contributor
That face mask thing is something that the everybody saw the Chinese doing so they figured it was correct. I have tried wearing one when sanding and cutting bones and I almost sufficate.

looks like there are a zillion to gobble this year. 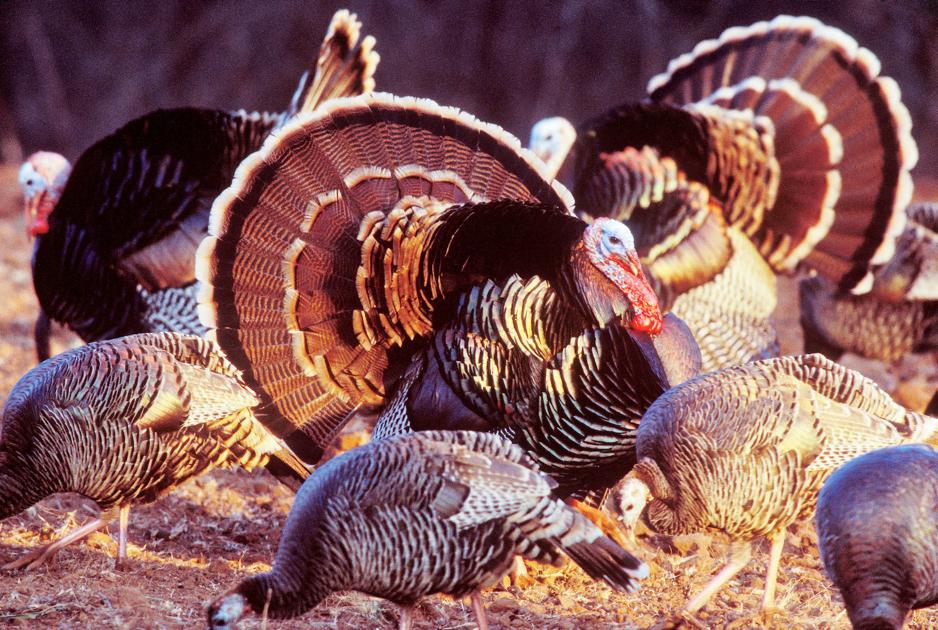 On April 4, when darkness gives way to the first grey light of dawn, another spring turkey season will be born across most of Texas. Time for turkey hunters to

Helium said:
Interesting enough... we are in CLT airport (very few here with zero line at all for TSA)

i have on a mask and took precautions BUT just found it interesting.
No TSA or airlines workers have on protective gear.
Click to expand...

CDC says if you are not infected better off not wearing a mask, something in the line off the mask will keep infection from spreading in people infected.

The mask is debatable

And you should see the traditional roost sites

Home for a few days 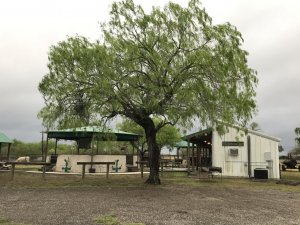 Nice place to hang the hat. Keep us posted and good luck

Sent from my SM-G970U using Tapatalk

Have a great sunrise tomorrow buddy.
Hope you smash the chit out of a couple rio gobblers !!!!

Live from the TX brush country.. cool front has it in the 50s overcast and showers forecasted. Wind out of NE at 20 mph... so we are in a blind to start out

next 2 days look beautiful for running and gunning

Helium said:
Live from the TX brush country.. cool front has it in the 50s overcast and showers forecasted. Wind out of NE at 20 mph... so we are in a blind to start out

next 2 days look beautiful for running and gunning
Click to expand...

Good luck! Hope you knock down a big one.

Sorry fellas.. long day but with lots of excitement. Stories to come later... but 2 birds down (1 Jake I mistakenly shot while trying to ambush a gobbler and a nice 3yr old gobbler called in strutting and gobbling)

Saw 50 deer, 80+ turkeys, 2 totes, and a roadrunner today along with some other cool birds such as Green Jays etc 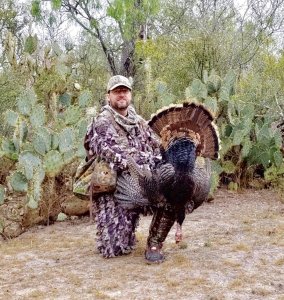 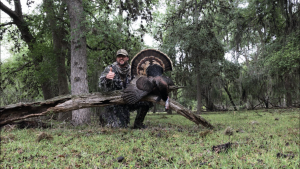 Time to help my buddy tomorrow.. will try to get some other pics and details of the kills tomorrow

Good job....you went, you saw and you conquered

Nice job I knew them pics were coming

With my buddy this morning... silent on roost but struck up a group after flydown

called in 11 Jakes and a gobbler at 8am

been working another bird but he is henned up... about to move on him 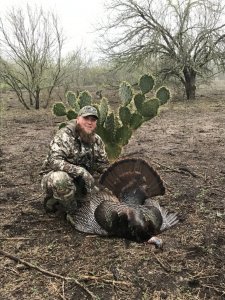 Due to extreme dry summer, lack of cover, and turkeys still largely flocked up and somewhat behind in mating.... blinds had been set up around roost and travel areas.

Opening morning was raining and mid 50s (cold for S Texas) we had multiple Jakes around , a huge gobbler bypassed us at 80yds, and then witnessedthe worst hen fight I’ve ever seen at 5 yards. Boss hen was fanning, strutting and beat the fool out of some jennies.

Opening lunch/early eve... moved to different areas and the guide just took me to show me a new area in a river bottom. Walking in we spotted 2 mature gobblers in road But too far for a shot. So, I made a stalk around some brush and stumbled upon a big redhead preening up against a cactus. Figured it was one of the gobblers and I Crouched up in the fetal position to get a clear shot through a small opening.Scope kicked me slightly (I thought) in the nose and the bird went to flopping.

To my surprise it was a jake! He had cactus spines/thorns all in his head. The guide come running down the road and said “you ok? Blood is pouring down your nose” at that time I felt it dripping and after using My face mask I was able to eventually get is stopped (see attached pic).

We continued to the river bottom and the guide left with my jake in tow. Shortly after settling in the nicest river bottom I have ever seen that was filled with cactus and Spanish moss laden live oaks and mesquite, 3 Jakes came on a string to the dekes.

Some weren’t just any Jakes as some had been born early and had 4”-5” beards and only 2 longer tailfan feathers (locals called them “magnum Jakes” . Eventually they fed off and 30 mins later 10 more Jakes came to the dekes. 20 mins passed as they fed away and immediately 15-20 hens came and fed around. After the hens faded away towards the Jakes there was a heck of a jake fight and the boss hen started talking. I began to mimic her and here she came with a bunch of hens in tow! Called her to within 5 yards and she was pitching a fit... that’s when a gobbler sounded off directly behind me but I couldn’t see it! Again and again he gobbled but then went silent as the hens went back the way they had came. I figured he had left also UNTIL he answered my pot call several times and then appeared among the cactus in full strut! It was a beautiful sight and what I had came to TX for BUT he hung up as free range cows had worked into my decoys eating Spanish Moss off the trees. He made it to 52 yards and wasn’t leaving BUT I had my doubts with the cows at 10yds so I let the TSS eat!!
Couldn’t have been more excited.

I took pics via video of my phone and made the Man March out with the turkey sling over my shoulder.

PS I’m not a blind hunter typically BUT “when in Rome do as the Romans do”. It did however allow me to see tons of turkeys and more deer than you can imagine. We saw Mexican eagles and roadrunners, green jays, etc 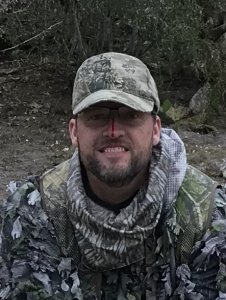 Day 2... my buddy and I got dropped off on a new property and walked in about 1 mile to an area the guide had never hunted but knew turkeys were in the area. Again, due to the lack of rain (until we arrived) there was little to no greenup in the area we hunted BUT got close to a dry branch with large live oaks that we figured birds were roosting in. We settled up under some mesquite trees and were discouraged when birds were silent on the roost! After flydown time, I would call every few minutes. Around 8am I made a series of yelps and almost jumped out of my turkey lounger when a pile of gobbles erupted directly behind us to our right. Within seconds a line of birds emerged 80yds away from the tree line running to us and stopped at 10yds away at our 4 o clock position! I remember thinking this will never work as my buddy is left handed and the birds were so close. I must’ve Muttered “be still and don’t move” 5 times and he would answer “I’m not moving”. Finally as the began to single file around our right side as they approached the jake and hen decoy I was excited to see 1 was a longbeard and muttered “longbeard” to my buddy.

As the birds approached the dekes directly in front, my buddy moved to get into shooting position and of course the gig was up BUT the birds grouped up and paused just long enough for him to shoot as they were at 25 yards! A bird went to flopping (I honestly expected 4 to flop as the angle i had was hard to pick out 1 bird). We began calling and got the remaining birds settled down and gobbling BUT they were all Jakes.

I asked my buddy“is that bird the one you meant to shoot?” And he said “yes”. We retrieved his bird and he in fact had killed the longbeard . For the next few hours we played cat and mouse with another longbeard but with no success.

Day 2 afternoon and led us back to where I had killed my birds.... multiple shot opportunities on Jakes arose but my buddy passed. We watched a pile of gobblers and Jakes go to roost and thought we had the gobblers pegged for Day 3 morning.

BUT of course it didn’t go quite as planned... the gobblers gobbled like crazy in the roost BUT skirted us at about 80yards and went straight forsome hens roosted down river. However, several Jakes and hens eventually worked within rangebut we passed.

Day 3 got temps into the mid 80s and it was muggywith fire ants and gnats everywhere! Although we had complained earlier in the hunt about it being our bad luck to get a cold front and rain in South Texas (even the locals were complaining and freezing

) ... we realized it was a blessing in disguise as we would’ve burnt up otherwise.

I would love to go back when they are on fire and split up out of groups BUT regardless we enjoyed the hunt and learned a lot !

from my experience Merriams and Rios are very similar in habits BUT way different and less wary than Easterns.

They do love to hear themselves gobble and the hens are more vocal as well. Glad y'all had fun sounds like fine trip

The Rio hen Yelp is very short and sharp. No rollover on the end. They are definitely more social than an Eastern 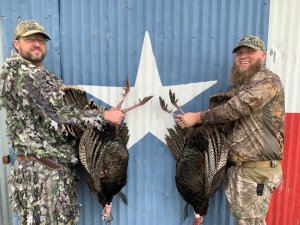 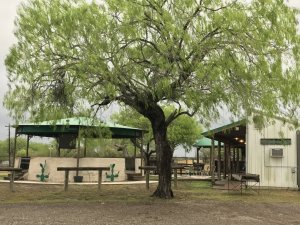 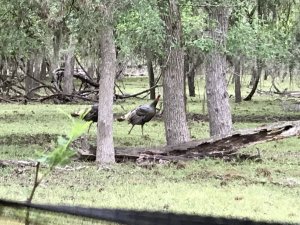 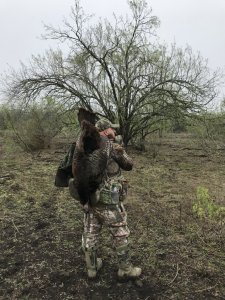