I readily admit, I'm still from the old school. I like my equipment simple and follow the KISS method most of the time. In bowhunting, I look at my equipment with the thought that if something can go wrong at the worst time, it probably will. That's why I shoot a traditional bow the majority of the time. However, I still enjoy shooting a compound also.

I'm at a dilemma with an arrow rest. I have been shooting a Whisker Biscuit Kill Shot. While some don't like them, I find they are a fantastic, simple yet effective hunting rest. My issue is I am tired of wrinkled, wavy, eat-up vanes. I tried a brush-style capture rest and was totally dissatisfied with it in no time (NAP 360). I don't even like the thoughts of a drop away rest. Too much moving parts to fail for my tastes. Yeah, I'm sure folks have shots gazillions of shots without issues, but Murphy's Law catches me too often, and I have no desire to shoot a fall away rest, right now anyhow. I dug around in my old tackle box and found an older NAP Quiktune 1000. Don't see many of those rests around anymore. Anyhow, mounted it on my bow, adjusted centershot and leveled it and adjusted the forks to my shaft and in no time was shooting very well with it. Its been used a lot and is probably about seen its better days, so I'll need to replace it soon enough. Its a pain replacing the heat shrink tubing on the forks continually but that old rest still works as well as it did when they were the new hot item.

What rests (besides fall away) do you prefer? I'm talking about on your hunting rig.

Contributor
I've taken over 100 animals with a bow (10-12 with a recurve, but most with a compound). I've also dabbled a little in the 3D circles. I used to shoot my bow a LOT.

I keep my Carter Just B Cuz attached to my loop, while I'm hunting (it's never been bumped off the string, although many think this is cheating fate).

I also still use the only fall away I've ever used (on a hunting bow)..... a QAD Ultra. I've been using this rest for almost 15 yrs. 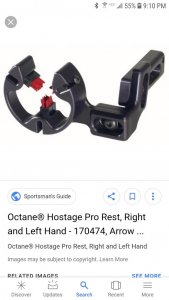 Staff member
Contributor
I'm using a Vapor Trail Limb Driver rest. I love it. My groups improved and velocity increased when I switched from a whisker biscuit.

Nothing wrong with old school, it worked back then and it still works. I have several Golden Key Premier rest in my bow box along with a couple Toughman rest that work just as good now as they did when I purchased them. It is a pain to replace shrink tubing but that's the nature of the beast if you're going to use the spring loaded prong rest or put some type felt on them, but it will eventually wear out too. When I used the Premier rest I just shot bare prongs until a couple weeks before hunting season and then added the shrink tubing that way I didn't have to replace it as much.

I know you said you don't want to shoot a fallaway and if not then the Biscuit or the mentioned Hostage Pro is a good choice or just stay old school. I personally use a Trophy Taker fallaway and have for years with no issues what so ever. Mike

Take a pair of scissors to your whisker biscuit and cut out the area the fletching would contact. Be sure that you have one of your fletching straight up when loaded (preferably your cock vane) in the biscuit to insure no vane passes through the black bristles in the bottom/center of it as they are stiffer and they are made that way to support the weight of the arrow.

Thanks for the suggestions.

Bowhunting for me is a close-range endeavor. I set up stands for close shots, usually in thick cover, and pride myself on getting close. That's the essence of bowhunting for ME. If I wanna shoot long ranges I got powder burners for that. I understand some guys enjoy longer range shots with archery gear, I somewhat get that, but I feel when a live animal is involved, and how fast they can move before an arrow even travelling 350+ fps gets there, bad things can happen. I prefer close. My last 2 bowkills was 5 and 7 yards with my stickbow. Said that to say that the WB has plenty of accuracy for my needs. Busting nocks and cutting vanes off at 30 yards and under proved it's plenty accurate enough for my needs, especially when my bowshots are usually 20 and under. Loosing a couple fps at close range is not a big deal for me, when the trade off is a super-simple, fool-proof rest that works. I'm just getting tired of refletching shafts so often because of wavy, eat-up vanes. Maybe I should have asked this instead of my original question:
What are the best 3" vanes for use with a WB? I'm currently using VaneTec V Max 3" vanes. They don't last very long with much shooting thru the WB rest.

mjbrady said:
Take a pair of scissors to your whisker biscuit and cut out the area the fletching would contact. ....
Click to expand...

Hummmm.....now that is an idea I had never thought of. I just may try that with an older WB and see what happens. Thanks!

Contributor
It's funny you mention how close you like to get. The first bow I owned was equipped with a Whisker Biscuit. I'll never forget the reason I switched to the QAD. I had a buck underneath me one morning that I was trying to get drawn on............and the noise the arrow made, as it was being drug across the bristles, alerted him.

So yeah......getting close is great, if your equipment doesn't hinder it.

For a tougher vane try the fusion Q2i

Darrin I’m shooting a 2” vane on my bow with an original whisker biscuit. No wrinkles, no noise that I can hear and very accurate.

DarrinG said:
:
What are the best 3" vanes for use with a WB? I'm currently using VaneTec V Max 3" vanes. They don't last very long with much shooting thru the WB rest.
Click to expand...

I switched to AAE Max Stealths last year and have been very pleased. I’m not shooting them through a WB, but they’re holding up nicely.

Another Vote for the Octane Hostage, it’s the only rest I’ve ever used and it’s given me no reason to complain

Not trying to hi-jack the thread but while on the topic, I’ve got the muzzy zero effect rest. I’ve noticed that as I am drawing back the arrow is bouncing off the rest, usually 1-2 times until I’m at full draw. I have only been shooting a bow for 2 months so that may have something to do with it. Have any of you guys experienced this? Any ideas?

QAD rests have been good to me. Change the felt once in a while, but that is it.

Sounds like your loop is possibly to tight and causing your arrow to bounce around while you are drawing back.


Moses said:
Not trying to hi-jack the thread but while on the topic, I’ve got the muzzy zero effect rest. I’ve noticed that as I am drawing back the arrow is bouncing off the rest, usually 1-2 times until I’m at full draw. I have only been shooting a bow for 2 months so that may have something to do with it. Have any of you guys experienced this? Any ideas?

Another QAD fan here. The Ultra Hunter is there entry level model is usually under 50-60 bucks. I have had two of them I have never had a single issue with either. Get the nicer models if you have the cash but if not the ultra hunter will do that job for you.
You must log in or register to reply here.
Share:
Facebook Reddit Pinterest WhatsApp Email Link
Top