Congrats again Pops, you already know how tickled I am for you!!

We had a convo yesterday, and in my opinion, this is the finest all around deer to come off the farm, and it’s fitting that you killed him! Enjoy your rightful place at the top 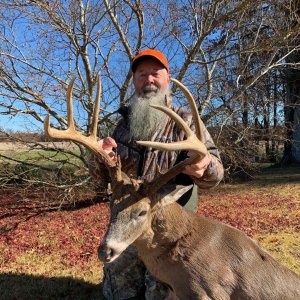 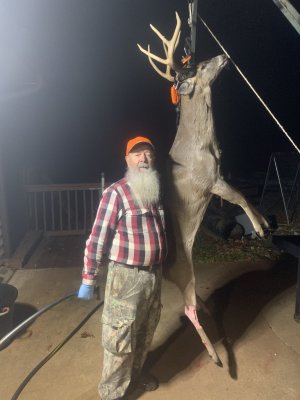 Eric Revo said:
Very nice buck, congrads on accomplishing your quest. His score isn't what's important on this buck, it will actually take away from the buck's attributes. He's a unique deer and it's a great history with him, that's what's important.
Click to expand...

I agree, but I promise the score doesn’t take away from that deer in any way

Great buck! I suspect he would score mid 130's.

Just out of curiosty did you weigh him?

Contributor
Regardless of what he scores, that is a GREAT NC buck.

MJ74 said:
Just out of curiosty did you weigh him?
Click to expand...

We weigh them all assume he will post that with the score.

QuietButDeadly said:
I have been chasing whitetails pretty much since they have been here to chase. I still remember the first set of deer tracks I ever saw on our Orange County farm when I was 15 years old. That was exciting. My first experience hunting them was with a farmer friend going to Camp Butner and hunting with shotguns and dogs.

From those beginnings, I have seen the seasons and deer population expand. I have hunted with most legal weapons except crossbows and pistols. And I have been fortunate over the years to kill a pile of deer and some pretty nice ones at that. I have quite a few shoulder mounts on the wall and over the last decade or so, a bunch of Euro mounts as well. I have killed some heavy deer (200+ lbs) but the older mature bucks with nice racks have been hard to come by.

All of that changed yesterday evening as I managed to be at the right place at the right time and I did not make any mistakes. The hunt was short and sweet. Does filtered out into the fescue hay filed from my left but they were not in feed mode. It did not take long before the buck showed up and I said shooter. From there it was all business, getting ready for a shot opportunity. It all happened fast as the buck stopped about 125 yards in front of me a showed me his butt. Not my idea of a good shot and I knew he would stand still long with the does around. A loud maaaaa and his head popped up and he turned broadside and took a couple steps to his left. I got the crosshair just ahead of the point of the shoulder and squeezed. Bang, Flop! He dropped like a sack of taters and did not kick or thrash a bit.

I watched him for a minute or so before I climbed down to go check him out. I was pretty confident that this buck was #1 on our hit list for this season and a quick check confirmed it. We have quite a bit of history with this buck over his at least 5 1/2 years. He has a habit of showing up on camera early and then vanishing, Last year he disappeared in early Sept. and was not seen until this summer. He stuck around a little longer this year until the end of Oct. and we really wondered if a neighbor had killed him. He is easy to ID with a trash point that turns 90 degrees off his left main burr and he also appears to have a third pedicle with another point in between his main beams. That point also has a 90 degree turn.

Bottom line, he is the best buck I have ever taken to date. I finally got a good one!

Congrats old friend. That’s truly a Buck to be proud of.

and what an encore!!

Congratulations QBD on a very nice deer. Savor the favor and enjoy your deer. I'm sure he made your heart beat fast and you were not disappointed when you walked up to him. And that's all he has to score. Congrats again on him and #2. To everyone else out there, those were the last 2 deer in Orange Co.

QBD2 said:
Congrats again Pops, you already know how tickled I am for you!!

We had a convo yesterday, and in my opinion, this is the finest all around deer to come off the farm, and it’s fitting that you killed him! Enjoy your rightful place at the top

Yal pull the saddle off before you took the pictures?!

Congrats! I like that gnarly headgear at the base. Great deer Sir!

Contributor
Some of you were pretty close on the score and some asked about weight.

Congrats QBD, is that narly point attached to his base or is it coming out of the skull on it’s on?

Thomas270 said:
Congrats QBD, is that narly point attached to his base or is it coming out of the skull on it’s on?
Click to expand...

The small one comes off the burr. The longer one is completely separate from the burr on a 3rd pedicle. 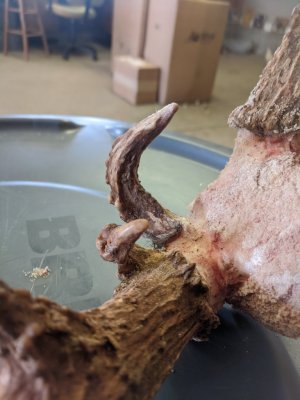 Heck of a rack! Congrats

Contributor
Nice job sir! A pair of warriors right there for sure....