Would practically do away with all pens.

Contributor
Need everyone's help on this one. I sent an email yesterday.

That means it's been reviewed and approved by the Commission already. Now it's just going out for public input before a final vote. I wonder what brought this on to begin with? Buffers, set backs, restricted hours, fox and coyote limits, zoning? I would say that somewhere there is a pen next to a residential neighborhood and the folks living there got tired of the dogs howling and barking all night. But there have been problems with fox pens for years. The illegal importation of coyotes before it became legal to possess them, escapes, disease issues, noise, gambling, to name a few. But if this passes I agree it will severely restrict, if not eliminate the running of foxes and coyotes in these enclosures. I have mixed opinions on this. On the one hand I would prefer that fox hounds remain in an enclosure instead of chasing foxes or coyotes across the landscape and getting hit by cars, crossing private property, getting lost, and so forth. It's challenging to even run deer dogs in some areas due to increased traffic and development. On the other hand as a hunter I believe in fair chase and have personal views as to what constitutes "hunting" and what does not. This is "running dogs" behind a fence in pursuit of fox and coyote and not hunting. And then there is the NIMBY issue. I wouldn't want my neighbor to fence in his land and force me to listen to hounds baying all night. But if I moved into an residence with an established pen next door then I have no one to blame but myself. Like I said above, I want to know who and what brought this on?

It really don’t make much difference what brought it on. You see it as not hunting, some see it as hunting. This is just the first step, as hunters (any kind of game) we need to band together and support each other and not split hairs over one’s opinion of hunting and another’s. If we don’t it will all be gone very soon.

Not sure what brought it on but I do know a high profile developer is buying all he can around a local pen and recently got all the zoning approvals. I don't run in the pen but have nothing bad to say about it. I can hear it from my house and I don't mind it. Plenty politicians on a recent duck hunt with said developer so it's possible that has something to do with it.

Running in a pen may be our only way to hunt soon. Another divide and conquer move. We all need to band together and protect all forms of hunting. First it will be pens, then hunting preserves, then all lead shot, then this way of hunting and soon, piece by piece they will have taken all hunting from us. Gun control will be done the same way. Instead of taking our guns away, they will make it harder to get ammo , more expensive and with higher taxes on ammo. A gun is useless with out ammo. And ammo is now in short supply and getting harder to get and expensive. Think about it.

Contributor
New ones already are highly regulated, I would seriously doubt one could be erected next to a housing development. I personally don't use them so I really don't have a "dog" in this fight but I do have a dog in the sport.

My issue is this. Most of these pens if not all of them have escape dens built in them. The animals are valuable to the owners and they don't want them harmed. So when they (the fox or yote) have had enough they go to these means of harborage and that race is over. People don't want dogs running during closed season or during turkey season etc so this is the alternative for many.

There are regulations on ALL pens in the state now as far as how many animals they can have per acre, they must be inspected as far as quality of fencing and if I am not mistaken there is a setback on fencing and cleared areas around them so as to mitigate trees from falling on them and animals escaping.

Pens are already regulated and have to be approved for a permit. This regulation is to shut the show down. People don't want hounds running on the outside and some don't want us to run in the wire. Running in the wire has never been about killing game, it is about training and running dogs. Many people have stopped running on the outside and run entirely in the pens. I will let my thoughts be know to the NCWRC.
Last edited: Feb 3, 2021

Contributor
Yeah, I let them know also. Like I said I don't have a dog in the race but I have some in the hunt.

Sent an email in opposition.

I don't run fox inside or out, but I did send in my emails in opposition.
Dog people gotta stick together.

Contributor
I just listened to it, there is money behind it, you can count on that. Housing values were brought up.

Contributor
When is this voted on ?

I listened but will comment in a email. I would say if they live in a $400k house, the walls must be mighty thin. The only time I hear my dogs when they running in the pen is when they pass right behind the house. Wife runs a humidifier in the bedroom and never hears them. This same guy was on tv back in the summer wanting it stopped from being built. County let it go on being built. It doesn't need to be a blanket decision that will effect every pen in NC.

wildcat3 said:
When is this voted on ?
Click to expand...

Contributor
Exactly which pen is the one that the majority of these issues are coming from ?

wildcat3 said:
Exactly which pen is the one that the majority of these issues are coming from ?
Click to expand...

Contributor
Ive heard from folks who participated in the virtual hearing that it isnt looking good to get ahead of this and get it stopped. If you own dogs or hunt with someone who does we could use your help.

Sent from my LM-G710VM using Tapatalk

What address did y’all send an email to? I’ll gladly send one

Ol Copper said:
I don't run fox inside or out, but I did send in my emails in opposition.
Dog people gotta stick together.
Click to expand...

YanceyGreenhorn said:
What address did y’all send an email to? I’ll gladly send one
Click to expand...

X2 someone post the email. I can’t find it. 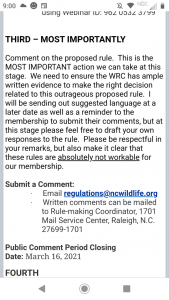 Email sent. Also have someone checking on the general consensus of board tomorrow. Will update if I find out anything

From what I heard today this will not be passed into law. The Commission was advised by a lawyer involved that they do not have the legal authority to enact many of the rules in the proposal. The Commission did not provide any pushback from this opinion.

ncdeerhunterRC said:
From what I heard today this will not be passed into law. The Commission was advised by a lawyer involved that they do not have the legal authority to enact many of the rules in the proposal. The Commission did not provide any pushback from this opinion.
Click to expand...

I was told not to worry about it right now but it probably isn't the last we hear of it. The commission is trying to push it to the authority having jurisdiction, meaning local zoning ordinance. .

Woods and water said:
I was told not to worry about it right now but it probably isn't the last we hear of it. The commission is trying to push it to the authority having jurisdiction, meaning local zoning ordinance. .
Click to expand...

My understanding is the county commissioners have already rejected any local ordinance. I know locals had been fighting against this one pen, but did not know it had went this far.

Correct. I thought it was a pen near me but I was informed it wasn't. Really doesn't matter as it's a a way to end dog huntin . Been drinking so end of conversation