Yep, definitely weather has a lot to do with it. I also believe birds are not staying/using the traditional areas for any length of time for a number of reasons, food or the lack of it (natural) being the main culprit. I’ve noticed this big shift in puddlers about 4-5 seasons ago not just in my area but in others as well. Seemed to have started when we had that extremely warm season awhile back. Places (rivers, lakes, sounds) that had grasses back then are almost void now. Herbaceous feeding ducks won’t stay if there’s not enough food. Divers (scaup) that mainly feed on mollusks will do the same. The New River is a classic example of this. The place stays loaded with birds when there’s a good recruitment of small clams but will leave quickly if they don’t find it sustainable.

I’ve been chasing birds for many decades now and lots of things are just cyclical for whatever reason. But there are lots of other factors play into it also and I firmly believe the popularity of corn impoundments all over the US has had a significant effect on the overall hunting and possible migration of the birds. Whereas 25-30 years ago I could Successfully hunt divers and puddlers from the Hyde Co sound area, I’m hard pressed to have a successful diver hunt now. And forget puddlers. One thousand corn impoundments in that area pretty much precludes any chances of catching the birds out there.

your point is well taken. there are not ducks in the impoundments this year.

Never seen it this bad. For the past 25 years our group has had poor seasons the years we had a substantial hurricane hit. Many of those years, like this year, there were loads of hooded fishducks and nothing else. Don't know what, if anything, to make of that but it gives me a lil hope this is just the worst of 'one of those years'.
As warm as it's been it'd be tough to kill em if we had em....

And generally speaking, Scaup, Red Head, Canvasback, Scoters and Bufflehead are not corn impoundment dwellers. Over the years, I've shot all of those birds(except Scoter) in corn impoundments, but not often. (The buffies get a pass).

Ringnecks do frequent corn impoundments, but they generally aren't a bird I've shot in coastal tidal areas like other divers.

I think the biggest problem with this season is the warm weather. It just magnifies all the other smaller problems.

Some of the guides have plenty of birds in their area thanks to them being fed. But if you are freelancing it's hard to compete against those little yellow decoys. You want to kill birds you have to go where the feed is and take plenty of $$. I was watching them feeding a few thousand redheads a week ago. I was set up about a mile from there. I may as well have been hunting on the moon.

Get those big corn piles out of public waters and those big flocks would break up and behave like wild birds and go out and forage. Then everyone would get a chance at a shot or two.

I know inland it has been one bad season. I have only two wood ducks from early in the season. I am not even seeing many birds. My guess is that it is the weather as much as anything. When it's 70 degrees in mid January, there is no reason for birds to move much.
This is a screen shot of the settling ponds near the paper mill in Roanoke Rapids. They are generally a good indicator of the amount and types of waterfowl moving through the area. Even when the lake isn't holding much they will raft up on these protected ponds as there is no hunting pressure allowed there. This year I haven't seen more than 20 birds on the pond all season.
I grew up on the side of the small pond in red. I have always seen a fair number of coots and non local birds on the pond each season when birds move into the area. This year the only non-local visitor to the pond is a lone grebe.
As much as I enjoy the chase, I am about ready to hang the gear back up in the garage and turn my efforts to rockfish season. 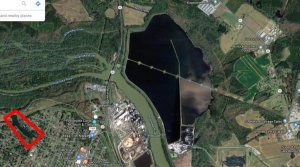 We had a good wood duck season. We probably killed close to 60 in the run of our swamp before Christmas. Generally 4-6 guns per hunt.

Downeast said:
We had a good wood duck season. We probably killed close to 60 in the run of our swamp before Christmas. Generally 4-6 guns per hunt.
Click to expand...

I'm new to duck hunting east of 95 but we saw plenty of ducks in the first two parts and had ring necks two weeks ago but Jan has been tough. I'm easy to satisfy so my season has been worthwhile. My daughter and girlfriend killed their first ducks and my lab has been patient to say the least. I plan on spending the last two weeks chasing birds.

So if everyone is having a terrible season in NC, and VA/NJ/MD/PA etc have no birds (or snow/ice) then what states/provinces are having a good season? In years past, when NC has a poor season do states further north have a better than average season?

Staff member
Contributor
That there is “classified”,,,,got to watch out for cyber ninjas

FL has lots of ducks and they are use to 70 degree temps. Go figure.

there are lots of ducks in certain parts of eastern NC. AS Woodmoose says, "Where is classified". I am talking hundreds of thousands. they are eating grass, invertebrates, and natural seeds. Some are wearing the corn out. They are here, just not where we are.

They are where the food is, be it natural or by the hand of man. Secondly they are where there is little to no hunting pressure or disturbance. Wait a week or two after the season and birds will pop up everywhere. And the big secret is they have been here all along.

Downeast said:
They are where the food is, be it natural or by the hand of man. Secondly they are where there is little to no hunting pressure or disturbance. Wait a week or two after the season and birds will pop up everywhere. And the big secret is they have been here all along.
Click to expand...

I agree with your assessment with the exception that there are places with lots of corn, no pressure, and no ducks. Places that have held thousands in the past seasons.

A recent quote from a person who knows duck numbers throughout coastal NC ...

Worst I’ve ever seen it. I still haven’t pulled the gun out of the safe this year. There are tons of refuge ponds/city lakes around where I live where I normally can see hundreds to thousands of birds.......they are all void of life this year.....but even that has been a trend the last few years. There is just nothing here for ducks. The warmer winters and the waters in the north are not freezing like they’re supposed to. Birds don’t have to move that far south to find food and open water any more. And like someone else said, the corn impoundments all over the country have had a major impact on where birds migrate. I have been on the water many days fishing over the last 3 months and can still count on one hand the amount of migrating ducks I’ve seen and on bodies of water that I used to kill limits on regularly. We can blame the weather, but our problems in N.C. are far bigger than that. There is no food here except for those little yellow decoys that get put out in certain places. The sounds are completely void of vegetation these days. When the grass leaves, so does everything else.
Last edited: Tuesday at 5:31 PM
You must log in or register to reply here.
Share:
Facebook Reddit Pinterest WhatsApp Email Link
Top