My area that I hunt is a old road that was used a troop trail on base, about 15 years ago. It’s over grown now, but it holds the majority of the oak trees in the area. During bow season I hunted about 60 yards further into this block next to the creek bottom. That’s where I had my first encounter. I was in a tree facing southwest, as that is where the deer had came from when I hunted this area 4 years ago. After sunset, a large body deer came through at a steady trot, nose to the ground. I had a deer downwind of me blowing. It never slowed him down. As I stood and started turning, the top half of my climbing stand gave way. I almost fell out of the stand. Both deer trotted off. That was the last time I hunted that area until two weeks ago. I had put in a lock on over looking a small grove of oaks on this road bed. I had a few small pockets to shoot into around me, and to my 1 o’clock I had a nice opening out to 27 yards. Which is where I decided to put the bait. I’ve only had does and a spike on camera. I had actually left this area for a couple hunts to hunt the southern end of the block where it was wetter and more open, but covered in scrapes. No sightings, no pictures. I had started conversing with another guy that hunts the area, that shared his scouting finds from the previous year. His findings mirrored mine from this year. And I decided to go back to my original spot as it put me directly in the middle of the travel corridor in this block 2 weeks ago, another very large body deer caught me off guard and crossed the opening at my 1 o’clock, despite my grunts, it paid me no attention. 4 days ago I got my first video of this buck on my trail cam. He was coming in right after I left the stand in the evening. All the deer were very cautious of the camera. 3 evenings ago, I had three deer come in from down wind. They stayed in the thick brush, until I lowered my bow. That night I pulled my camera. Yesterday at lunch, I replenished the corn in front of my stand. I couldn’t hunt it due to getting off work late. I didn’t want to take a chance of busting them close to the bait pile. So I had to wait until today. It was a gorgeous morning, somewhere in the 40s, frost on the ground and no wind. I had put my outer layers in the corn barrel the night before. I figured, If I can’t beat his nose, maybe I can fool it. Got into my stand about 545, quietly set up, and started waiting. He showed up about 630 to my 2 o’clock about 35 yards away, looking right at me. I heard him coming and was already positioned and focused on him. I tried to avoid contact with him, as I was afraid that somehow that would scare him. He stood there. I just closed my eyes and prayed that God would just grant me an opportunity. When I opened my eyes he was moving towards my opening. When his head moved behind a tree, I drew. He crossed the first small opening and my pins fell right behind his shoulder. I squeezed the trigger and watched the arrow disappear into the buck. I couldn’t believe it, then I started doubting my shot. I couldn’t find the arrow with my binoculars. I waited an agonizing 45 minutes to get down and find the arrow. I found blood and hair at the point of impact. The wound was bleeding pretty good from the moment he was hit. The arrow was about 5 yards behind him. Covered in blood and had a bent blade. I was pretty sure I had heard him crash, but the arrow didn’t look like good blood, and the trail would fade, then come back strong. He lunged forward on the shot, then j hooked back it the direction he originally came from. After about 60 yards, I saw him laying in the brush. About 70 yards from my stand, almost 200 to the road.

Side note: a week ago, I decided to go back to a multi pin sight because of how quick I may have to make a shot and range a deer. It was important because, he didn’t come directly to corn but walked a few yards behind it. I put my 20 high in his vitals with the 25 being the dead center pin in his vitals, an the 30 being in the bottom.
The other hunter in this story, had told me early in the season that there was a couple of big bucks in this block that he and his friend had been hinting for the past 4 seasons. He sent me some pics. I had almost written the stand off as just a meat stand until this week, when he showed up on cam. After sending the other hunter a pic of the buck on the ground, he called to congratulate me. After I got him out of the woods and held the rack up for pics, he called his hinting buddies and they confirmed it was the big buck in that block, and I had just killed the deer they had chased for four years. He even sent me photos from the past 4 seasons. 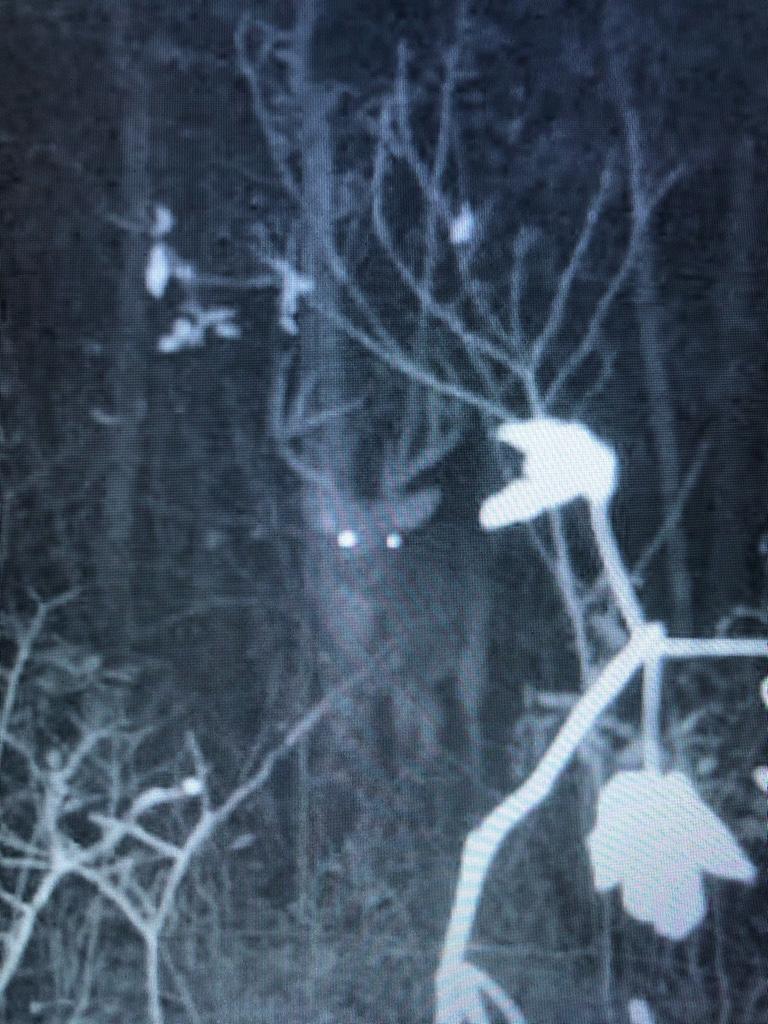 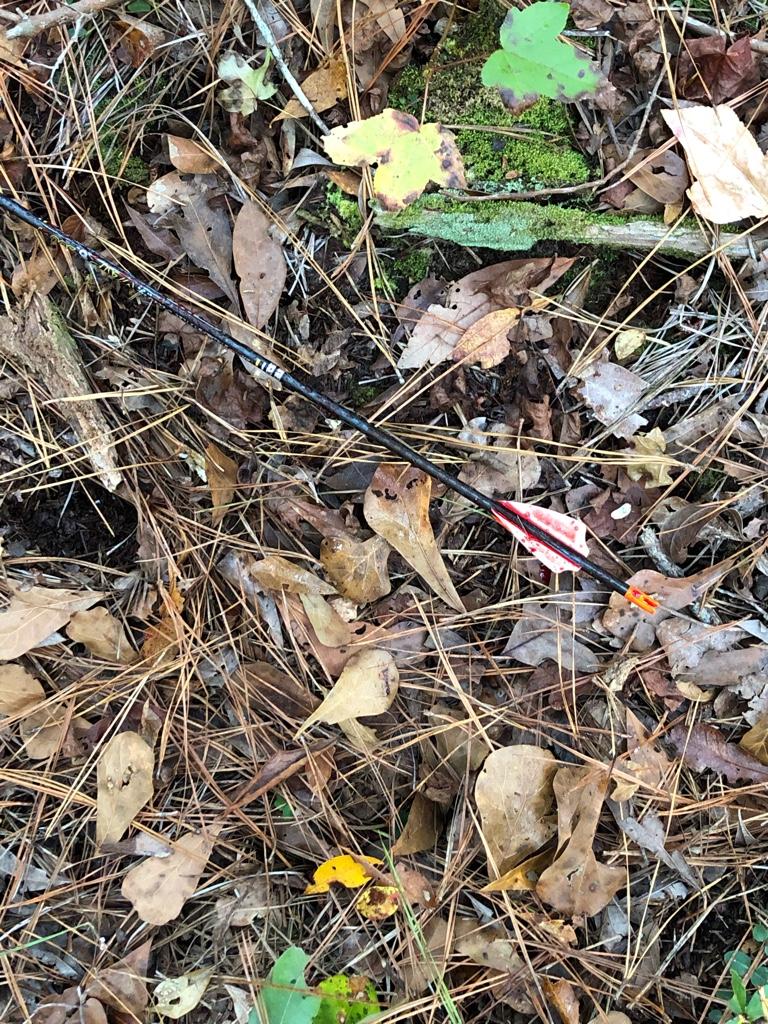 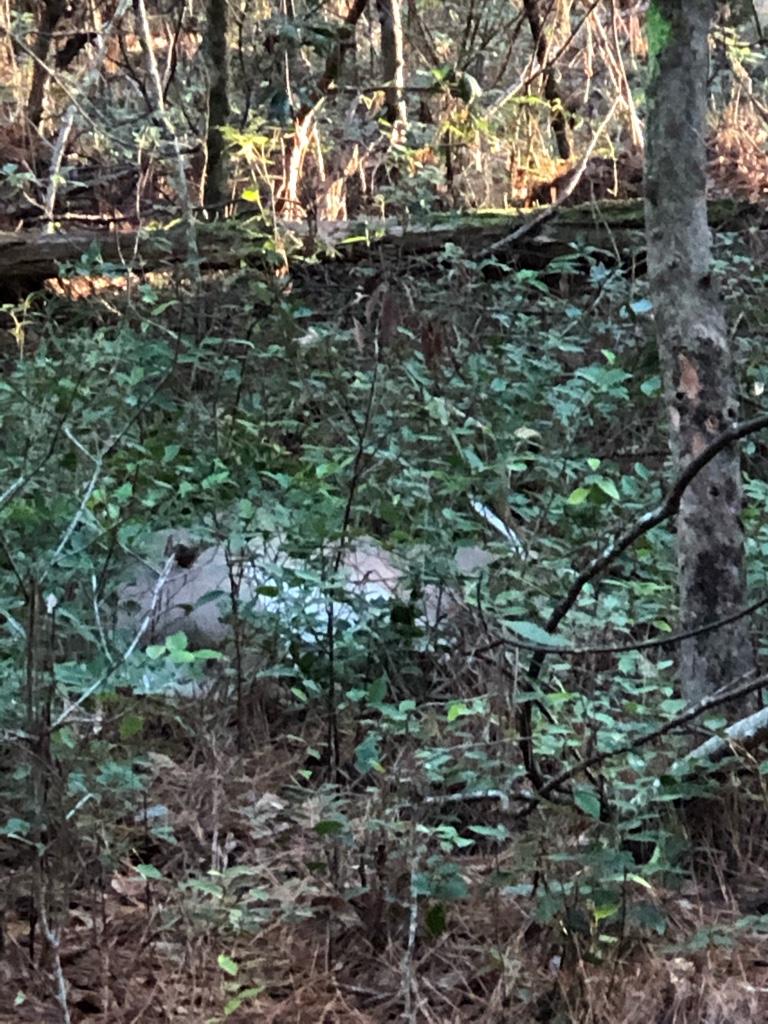 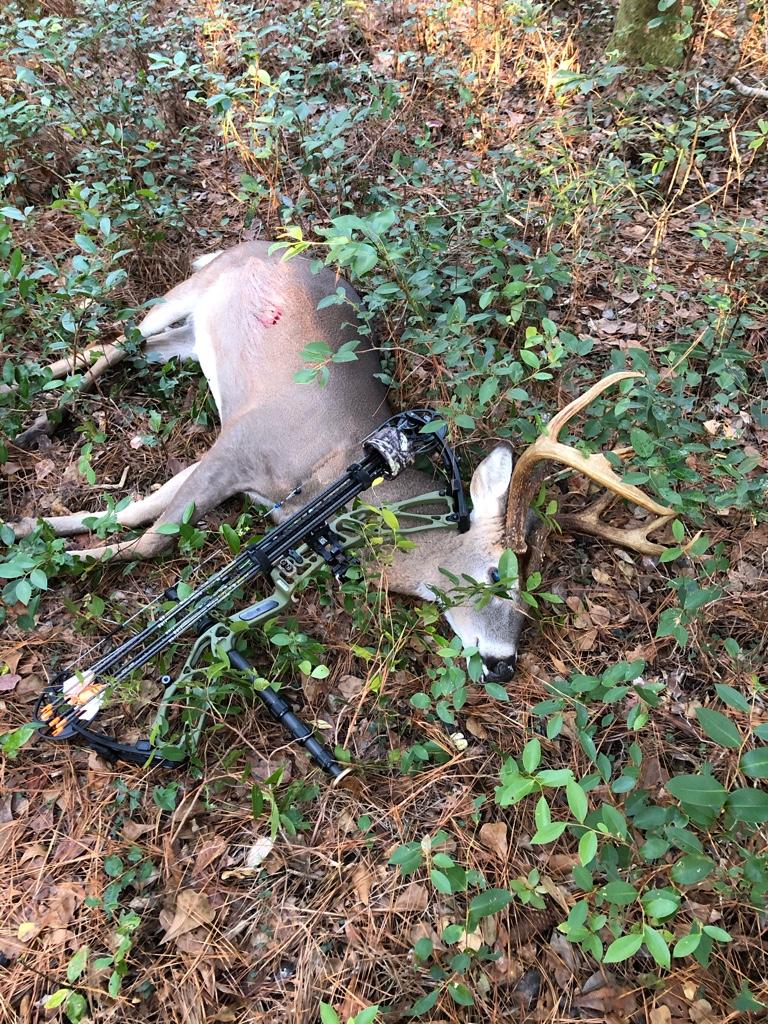 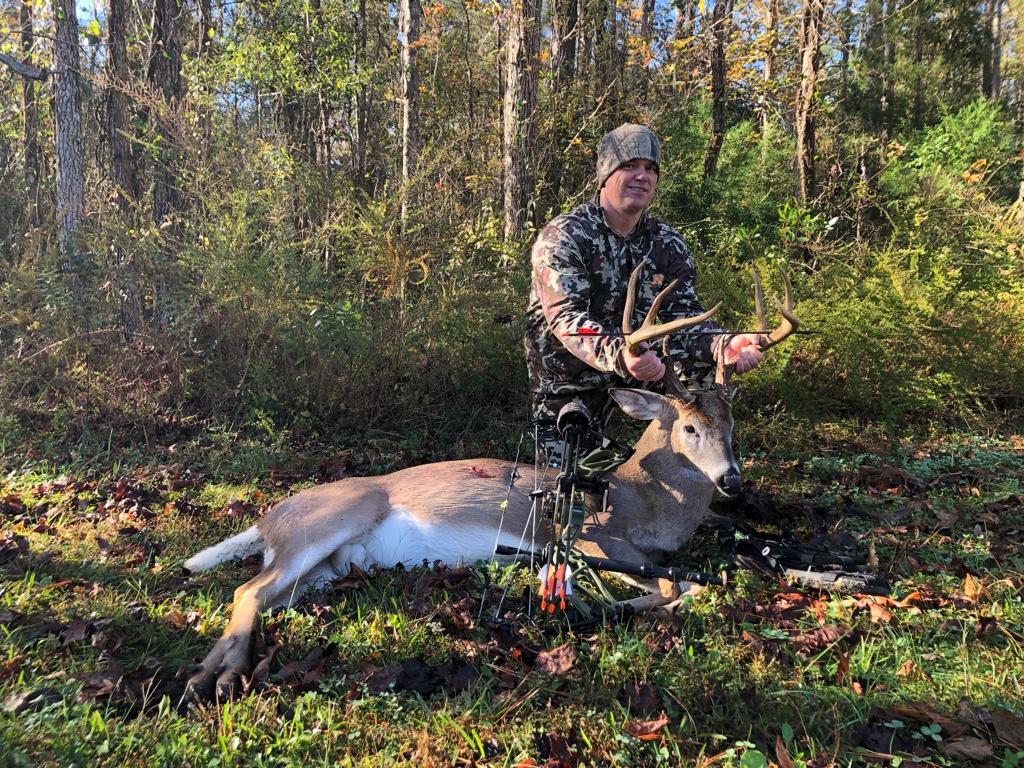 Sent from wherever I was at the time...

Thank you gentlemen, it’s been a long season, and a longer 4 years without hunting. Very blessed by this day.

Good work.
I keep my outer layer in my corn bucket or bag too.
Good minds think alike.
That cover paid off I think.
Congrats man

Big congrats on a very fine buck ! I'd be happy to have that deer, anytime. You hunted hard and came out on top !!!

Congrats man! are you hunting on lejeune? what zone were you in if so? unless that is top secret info.

Congrats!! Some monsters on lejeune just gotta find them lol

Gamechaser96 said:
Congrats man! are you hunting on lejeune? what zone were you in if so? unless that is top secret info.
Click to expand...

I’m on the air station, that’s as close as I’ll get you

Sounds good! I have a few buddies who work those bow zones for everything they're worth and always seem to find a big one, but your buck is bigger than all of theirs! congrats again awesome buck especially for this county. 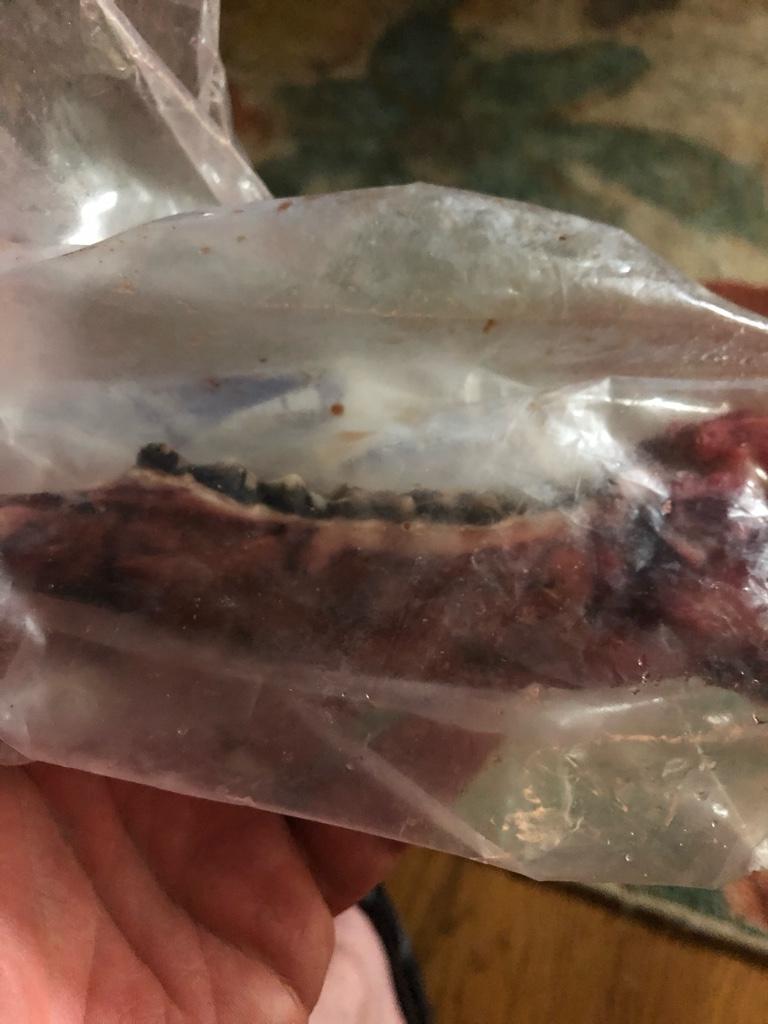 Good work. You can take good pictures of it and email or text them to your local Biologest.
If you have a dermal tool you can cut a back tooth in half and count the rings. As explained on YouTube.
Under the current climate sending it in could be a pain. Cheers

If that's an Onslow buck, that's a good buck for that area period, much less for a bow buck. Nice job and plenty of congratulations!!

I'd like to again congratulate you on a fine buck.

If you want to really know how old he was, send a tooth to deerage.com (I think that's right....but, it's been a long time). They'll do a cementum annuli cross-section and tell you exactly how many candles were on his cake.

Problem with sandhills deer is.....they eat a lot of that sand, as they eat "normally". They wear their teeth down, really quickly. Even the biologist is going to pure-t-guess on this one.

Thank you for the many compliments. Judging by what the other hunters have told me, he seems to be a 6.5 plus year old deer. One of our guys told me he and his friends have been after him for 4 years, and he was a basket when the first saw him. He also had a twin brother in the same small block, that was taken last year.