Was needing a new .410 for my son this year and am not too keen on the Mossberg stuff. Ended up doing a GB search and the Rossi Tuffy Turkey popped up.

Stopped by FG&G Tues afternoon and picked one up. Had already bought a Vortex Crossfire red dot for the purchase a week earlier.

I still need to give the barrel a good scrub before taking it to pattern but I should have some time to do that since I’m working remotely now. 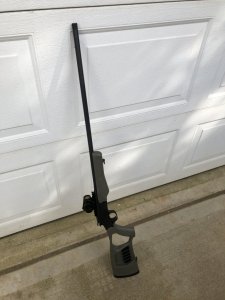 Cleaned and polished the barrel yesterday. Patterned it today.

I’m not disappointed. In fact, I may tote it when my son isn’t.

Nice grouping! I bought my grandson a savage 301 and it patterns great in a 410.
I love that little gun. Good luck this season

I made a bone-head mistake. When I mounted the red dot I cleaned every screw and thread before using loctite, except the base.

Got home after patterning the other day and noticed the mistake, so I removed everything and repeated the mounting process including the base.

Took the opportunity to bring a few more guns for my son and I to shoot. Got the Tuffy back and ended up shooting a better pattern. I’d say the average count between the 2 days would be in the mid to upper 140’s.

Colt wanted to shoot a “super shell” so I let him take a shot with the TSS at the shoot-n-see target. The wind was blowing so it wasn’t as tight but had plenty of margin of error if he or the bird moved. 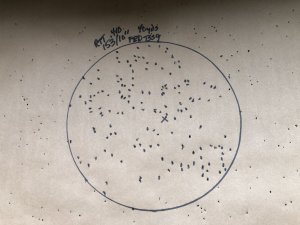