Never seen this before.

Would you shoot one at your once in a life time buck? 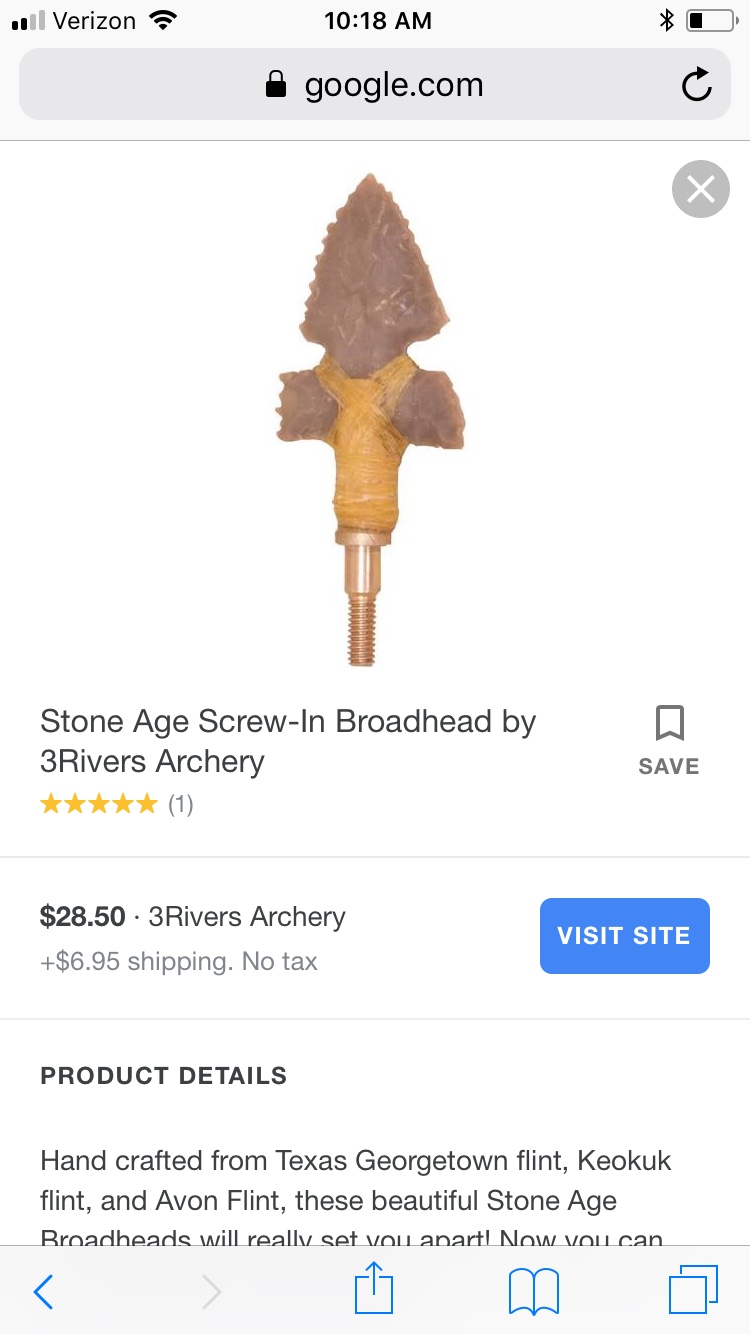 I think I would. Should poke a hole in one.
Might have a tough time finding much blood.

Contributor
That's something somebody would buy who's trying to prove something to themselves. i already know I can kill a deer with a bow.

IMO, you may have a chance with a longbow or recurve. That looks like a lot of weight. Would reek havoc on a carbon shaft and a modern compound. Would fly about as well as a school bus. It will kill a deer. No question there. Good luck putting it where you want.

I hunted with a guy in Illinois that knapped his own heads from obsidian. So sharp that it made a scapel seem dull. If you nicked your finger it would not stop bleeding. Those heads produced some of the most fantastic blood trails Ive ever seen. Not sure how those shown would fly but I guarantee they'll kill if placed properly.

Contributor
Quite a contrast... a screw-in flint head.

Great look to it, but I want the best chance to kill quickly. Great conversation piece.

perfectroadglide said:
I want the best chance to kill quickly.
Click to expand...

That would be a rifle correct?

sure and while im at it i think ill put stone wheels on my truck! IMO if you want to use a flint head go all in and use a stick bow.

Contributor
Stone age technology, 21st century convenience. You know, for when you need to swap to your practice stones in the yard.

Contributor
I'll bet a crossbow would sling that thing with a short stiff carbon shaft...maybe one of those $3k Ravens...

I think I want to buy a few of those and scatter them on some walking trail in a state park. Watch to see if some non-hunting city person picks it up and starts telling everyone he found an indian arrowhead.

3 Rivers seems like they've cornered the market on selling things at a high price that you can either make yourself or find elsewhere at a lower cost. I'm on the Primitive Archer forum and there are plenty of people on there who do their own flintknapping and arrow building, using bone, different kinds of stone, reed, wood, different kinds of feathers (turkey, goose, etc), real and artificial sinew, etc. Why you would screw on a stone arrowhead is beyond me.

Staff member
Contributor
I thought this was going to be an April fools joke....alas.....

Contributor
3Rivers...where the shipping costs you more than the product.....

I've been flintknapping 30 years and the same idea crossed my mind, but I never pursued it because it seems silly. It would be exceptionally difficult to get a stone point on a modern screw-in shaft to fly straight. If you had 4 of them, they'd all fly differently because weight, material density, and flaking pattern would all vary.

About 15 years ago I was hired to make a half-dozen stone points out of Hornstone for a guy to hunt with who built his own bows, but lacked knapping skills. I'm kind of embarrassed to admit that it took four months to make 8 matching points (also made him a couple of spares). I didn't work on them every day, I broke several(!), and had a few that were not balanced well (fat on one side, thin on the other). It ended up being more of a challenge than I expected. I won't do it again. I lost the pictures of the set in a computer crash, but I still have a shot of one of the ones that didn't make the cut, if I can find it.

Also, by North Carolina regulations, you're not allowed to hunt with a barbed point and below the notch on that point in the picture is pushing the limit.

No idea how that could ever reliably fly straight. Has to be a novelty item.