Temp dropped about 20 degrees between the state line and Cheyenne and finally hit snow up around Douglas. Where we scouted on the east base of Casper mountain has 3-4” of snow. Wanted to quickly glass where I saw the big 3x3 back in July and had a borderline shooter 3x3 and his slightly smaller 2x3 friend feeding at 200 yards not too far from the truck. Ended up seeing 5 more does come walking in the bottom below the truck while we were walking out. Add 5 more does on the edge of an isolated piece of public on the drive to that spot, 6 more on the boundary where we turned around not far past there and 4 whitetail does on public while driving out and we can’t complain about the first hour and half here lol. Didn’t snap any pics but man I love this country out here. Tomorrow night will for sure be a picture dump. Food and beer time for this guy now.

Good luck want to see a pic of that big buck

Good luck! I canceled my travel plans this week to Lander in favor of better weather.

here’s a couple my dad was able to snap pics of! 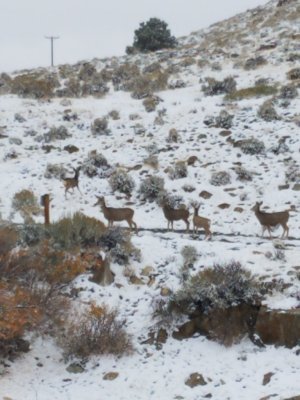 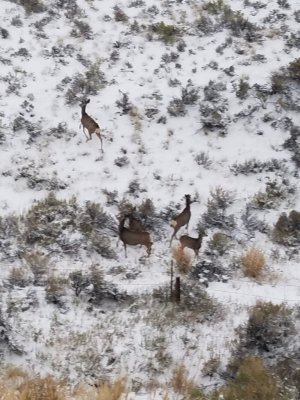 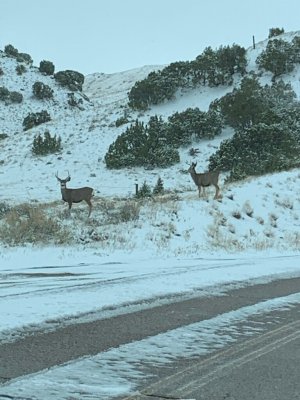 Well that’s just like home. Shoot them off the road haha

Made it through the airport security, my adventure has begun! 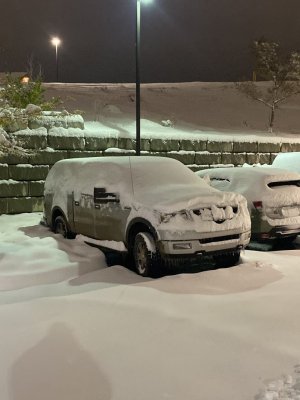 Break out snow camo that's killing weather if can get to where you need be that is. Good luck

Just barely made my connecting flight and about to take off to Casper. I had to sprint from one end of Denver airport, catch the shuttle and sprint to the other end to catch my flight.

cloningerba said:
Just barely made my connecting flight and about to take off to Casper. I had to sprint from one end of Denver airport, catch the shuttle and sprint to the other end to catch my flight.
Click to expand...

Your luggage make the connection? I

Well 6 hours later @Smarr28 and I along with the two guys that tried to help us are out of a waist deep drift in a curve along with the ditch that accompanies it. Nothing you can do when you run into the one random stretch of drifts that deep in the middle of a curve while cresting a hill. Buying those guys a big steak dinner for their trouble. White conditions this morning but saw 12 does on public and then 3 more at lunch before the SHTF. 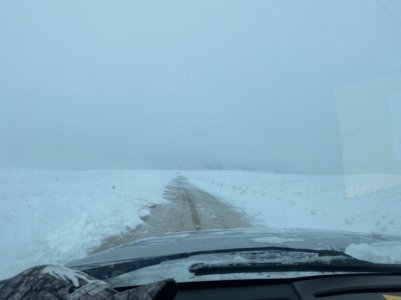 Yeah made it hear safe and sound. Unfortunately we weren’t able to make it to ncstate. The roads off the black top are sketchy at best. Hopefully a couple of days of dry weather dries everything out. Seen a bunch of pronghorns and few mulie does.

Good luck guys!! Hopefully the weather clears up enough so y'all can get out and hunt. Those deer and elk should be up and moving.

I'm watching the weather and road situations closely since I plan on traveling the I-80 corridor in 2 weeks.

Covered like 6 miles this morning, most after splitting off from @cloningerba and his dad. Saw 20 does in total. Then we setup camp on an 80 acre section of blm that was sand and not mud under the snow. Ready to go now!

Thankyou all for the Goodluck! Unfortunately due to the secondary roads my dad and I have been limited. Hopefully it drys out sooner than later. We had a good long scout this morning with ncstate and Smarr. Think we jumped like 17 muley does. After that we tried to make it out to the Bennett mtns and it wasn’t happening. We did see an absolute giant pronghorn. Wish I could have gotten a pic. Scouted a couple other areas and found a couple bucks and at least another 20 more does/yearlings. Hopefully we those bucks listen well and stay put for in the morning.

Had no clue what to do this morning and decided we’d go in early on the back side of some ag fields at a place I had marked from map scouting. As we were getting ready to leave the truck, a local pulled up that had the same idea as us. He had a busted up foot so I told him to drive back in there like he planned and we’d set up in another spot. He suggested to me the other spot I had in mind anyway and also shared that there is a 210” mule deer running that corridor of private and public. Not bad for just a spot I thought had good potential. Walked in and got situated on the boundary and figured out where the imaginary line was where we could shoot vs not shoot. Had 3 whitetails, one being a buck with a nice frame (all I could ever tell), slip along the bottom on private and eventually bed within 600 yards from us. From there we just watched mulies out in the ag a mile away, with 4 does filtering in and eventually crossing over below us onto public at 260 yards. Had some mulies sparring multiple times out in the ag too. But when I finally got the spotter on them as they were headed our way there wasn’t a shooter in the bunch so we packed up and are now planning this evening out while seeing where the pressure is currently and waiting on Ben and his dad to meet up with us. Had the right idea but not the right sex or size deer this morning. 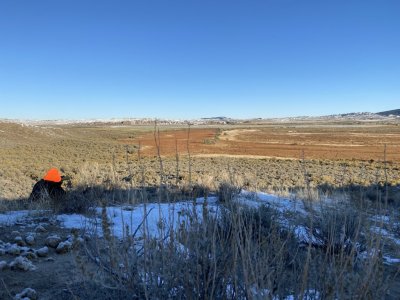 Just got a text that @cloningerba or his dad have one down.

I’ll let him post the story about their morning but here is @cloningerba and his dad with his dad’s buck. I believe he has some better pics in the sun. 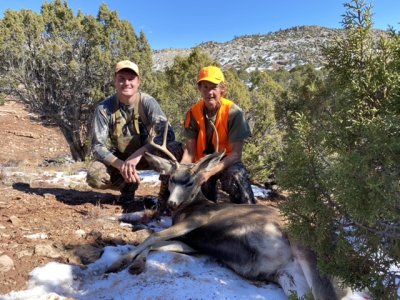 Doe parade for @Smarr28 and myself this evening, I know we saw well over 100 deer combined on private and public, but we never saw antlers. Gave going after the big buck the local told us about a shot, roads should let us hit the big breaks we want to hunt where we got stuck starting tomorrow afternoon. Awesome view with all the deer out and the ducks and geese flying. 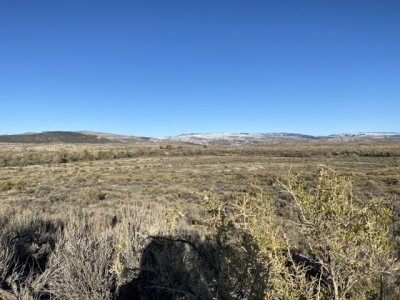 Snack break, working back some canyon/hill country stuff but all the sign is old. Fresh sign is by the road of all places where everyone is. @cloningerba is setup on a bowl near the road so maybe he’ll have some better luck now that the sun is getting up good. View from the glassing spot after daybreak: 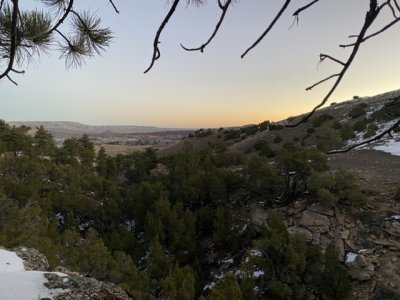 Walked up on 6 does at 50 yards on top of a saddle this morning and proceeded to see no deer after that. Did glass a herd of 30 elk with at least 4 bulls down low on the mountain this evening about 1.5 miles away. Hitting up a different unit tomorrow.

You may have said but if so I missed it, what kinda temps are y’all seeing out there?

My apologies for the late replies. Service for me has been spotty at best and the “wifi” at our cabin comes and goes depending where you are standing lol.

I’ve had an absolute blast so far!! It’s beautiful country, unlike I have ever seen.

My dad was able to get out a little early and do some scouting. He found 2 bucks not far from where we are staying and we saw them multiple days In a row in the same general area. We came up with a game plan and decided to go after them this past Friday opening morning. We sat up high on a rocky ridge watching a valley. It was close to the road within several hundred yards but a highly used mule deer travel corridor. We got in early and seen a few does by the road around 8 am. At about 830 my dad stands up to stretch and 2 “deer” not sure what they were but pretty sure they were the 2 bucks run across a ridge across the road from us. Here’s where it gets interesting.

About 30 min. Later here comes a truck up the road. They pull off quickly and a guy and a girl with a rifle pop out of the truck. They walk over the ridge across the road and BOOOM! I hop up and run to the top of the ridge to see what was going on across the road… The 2 bucks are standing about 250 yards across the road in an open area besides a gulley. The one buck was looking at the other buck curiously and that’s when I noticed the other bucks leg was just dangling…

I watched as the bucks disappeared up the gulley but couldn’t see the 2 hunters from the road. A few minutes later he they come looking for the deer. They started looking and we decided to walk out the opposite valley to see what we could see. About an hour later we get back to the truck and the guy/girl are gone. I told my dad let’s go check out the area and see if they got the buck.

My dad was able to pick up the bucks tracks fairly quickly but we were able to find a spec of blood. We started following the tracks up the valley to an area where it split. The tracks went up higher and my dad went that way and I followed the ridge below them. A couple hundred yards up I looked up to my left in a draw and saw one of the bucks staring at my 60 yards away. I could see the other bucks back standing behind him. At this point I knew my dad was in the general area slightly above them but didn’t know where. Not a minute later i see him emerge behind him and slide his gun off his shoulder. Both bucks were focused on me and the buck in the back was of to the side from my direction. I got to watch my dad roll him! The other buck unfortunately was in a direct line of sight with my dad from my direction. I was not going to take that shot.
Also, unfortunately and unknowingly to my dad the buck he shot was not the injured buck.

The injured buck, ran over 2 ridges and down a bluff gap on a huge cliff. At this time @ncstate and @smarr where on their way to help with the recovery. As they were coming up the road the buck crossed right in front of them. I was able to watch from the cliff. Unfortunately the injured buck never stopped moving and never offered a shot.

We thought we had a general idea where the injured buck ran and decided to let him go bed down and go after him in the afternoon.

@ncstate and @smarr were kind enough to come help quarter and carry everything out which was a blessing!!

We all enjoyed a warm tenderloin, backstrap and best of all heart and onions dinner 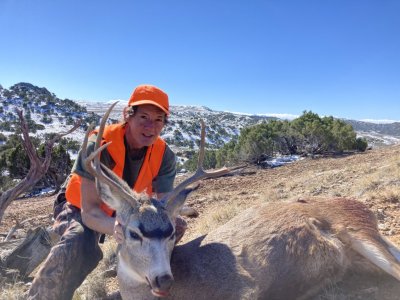