Moles in the yard

Contributor
run a pipe from exhaust of some type of combustion engine to the hole.
Last S is automatic.

Contributor
Around 25 years ago I had a problem in my Wake County yard with moles. I trapped a couple with the spike/guillotine trap but problem persisted. Not sure if my trapping technique was wrong or what. Neighbor suggested I try Rozol (Warfarin ingredient) small blue pellets in their tunnel runways. Rozol worked great--moles all gone. To my knowledge Rozol is not legal to sell in many states now. I would be inclined to first try the Juicy Fruit gum if I had a problem now. It is least expensive and prying eyes can't interfere (I had several neighbors asking me what I was up to when I used the trap). Plus neighborhood kids (if there are any nearby) might mess with the trap and next thing you know your looking for an attorney. My oh my how times have changed...

Staff member
Contributor
Neighborhood kids don't come in my yard and nosy busy bodies get very little in the way of a response.

Contributor
certain pesticide options for moles have been legal to use since 2015 in north carolina if thats the route you wanna take. 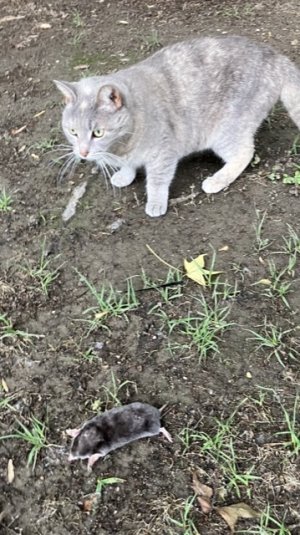 My grey cat catches them as well. She also points them. Have a few beers and watch for the cat creaping around the yard playing bird dog looking down.

We used to have a vole problem here in the circle until a pair of broad winged hawks nested in the back yard and cleaned them out.

As mentioned Jack Russel. We had one and moles at the same time. He would love to bring them to us and drop them at our feet and wag his nub so proud of himself.

We also had a shitzu (btw not a real dog lol) and one day the jack R brought us a mole and dropped it at our feet. Well the shitzu was standing right there and as soon as it was dropped, the shitzu slurped it right down in 2 seconds. We all had a good laugh at that one. Then we realized that while they were out in the yard together it probably happened many times. That dog has been gone for more than 5 years and still no moles. The story of Wishbone the JR devouring both young and old, is passed down from generation to generation in the mole community.
You must log in or register to reply here.
Share:
Facebook Reddit Pinterest WhatsApp Email Share Link
Top