Staff member
Contributor
I have had a lot of memorable hunts over the years as well as many of you. Looking through my photos the other day I came across a few I thought I'd share. 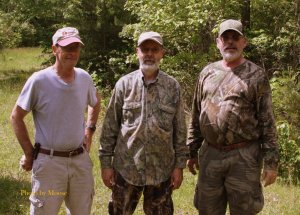 The Old Farts.... Larry R QBD and RidgerunnerRP I think ZacksGP was part of this but I guess he was camera shy. These guys all got together for a turkey hunt and fishing at our lease in Alamance County. I believe Larry had an encounter with a snake while turkey hunting...... I chased a couple of tresspassers off the property who were trying to sneak in to fish . I think it was Larry that witnessed Moose running one of the few people who have . It was just a fun time with a good group of guys. 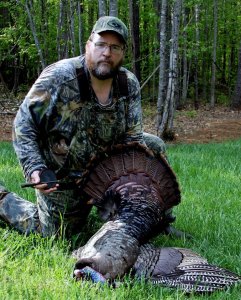 2012 /13 I was a pretty sick and had a major surgery in december in January developed an infection and had to have another surgery. I missed 6 weeks of work and to keep from going to crazy I spent some time building a few turkey calls. That spring I called in and killed this gobbler with one of my calls. I also call this my wife's gobbler too because every morning she had to get up at 3 am with me and pack my surgical wound before I left to go hunting. That wound finished closing when I was at Conman's for the summer gtg and fishing trip. It was no joke...... I was glad to get this with the call I made and the 20 g turkey gun i put together cause doctor wouldnt ok a 12 g. 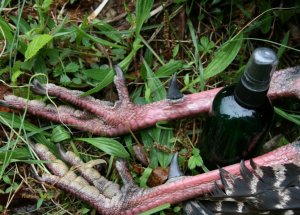 I don't remeber the year but it was early 2000s I'm sure ....when a group of us hatched the idea for Hen n Heat Turkey lure. A hunting trip in Caswell County and biblical event like rain that drove us all back to the cabin and this is what we came up with. Over the years a number of us have used it to kill a gobbler. I still have a few prized bottles hidden away and break it out on just special hunt days.

I'm sure some of you have some special hunts you remember ........ feel free to post up....... hopefully we"ll all go out and make some great memories this coming season.

Contributor
Yep, I remember that day well. No turkeys were harmed but I think we all had a god time!

And didn't we start out at the club house in Caswell before we went to Alamance. I know I remember hunting with ZG is Caswell but I don't think he went with us to Alamance.

And I had forgotten about your encounter with the fishing trespassers.

Good times, Thanks for the memories!

Staff member
Contributor
I think your right Qbd, you guys started in Caswell. I was working so I didn't join ya till Alamance and that's why I missed getting ZacksGp in photo.

always a classic tale to be told with that stuff, banned up here and last i heard 32 States

I was at Caswell not sure why I wasn’t at Alamance. Seems like Tightline was with us somewhere.

Zach's Grandpa said:
I was at Caswell not sure why I wasn’t at Alamance. Seems like Tightline was with us somewhere.
Click to expand...

I remember you and I striking out looking for gobbles in Caswell but we did not hear anything. I do not recall if Tightline was there or not. Do not remember why you did not go to Alamance either.

Moose said:
witnessed Moose running one of the few people who have .
Click to expand...

I'm in that select few,,, seen Moose running towards a moose!!

Contributor
Wasn't Putt part of this hunt as well?

Staff member
Contributor
Putt was part of the HnH hunt but not the OF. I also looked back and the OF got back together in August that year and fished Alamance ponds.

I should post some of those photos up a couple of good ones of QBD but that will be another thread.

What about the Turkey School?

QBD2 said:
What about the Turkey School?
Click to expand...

Yup we had a number of those over the years.

Turkey Skool was a blast! I attended and I didn't even hunt turkeys at that point. Putt's youngins were just past toddlers.

No doubt turkey hunts can make life long memories, but they are better when there is more than 1 hunter.

My favorite was with Cousin Tom. He'd never been turkey hunting, I had a single jake notched in my belt at this point. Opening day was the same day we had to pick up our beef from the landowner, so we figured why not give it a shot in the morning. At dinner, we actually joked about "what if 2 come in? If so, we'll count 3....2....1....fire".

Next morning we heard a TON of turkey vocals! Sure enough 2 birds approach our dec's. Cousin Tom had his gun in his lap, but I was in the firing position. I whispered "I'm gonna shoot ok?" If I did, I think he'd have shot me. It felt like forever but he finally got his gun up, we counted 3....2....1.... and we both fired. On video, it sounds like a single shot. But 2 jakes were flopping in front of us!

Even if I get dementia, I'll never forget that morning. Especially hearing Cousin Tom express over and over again how "easy" this turkey hunting thing is lol.

And I can't believe you still have some Hen N Heat bottles! I've got a few, also.

The MRS keeps asking "what are these" and I just tell her, "MY RETIREMENT FUND!".

NC still hasn't banned the use of scents for turkey hunting, think we could make another batch? Baby needs new shoes and all.

Contributor
^When you get it done, please give me a call. I'll pay good money for some of that legendary stuff. With my limited distance these days I'm pretty sure I could put someout in the front yard, sit on the porch and get a good bird.

Yeah that Hen N Heat was good stuff. I tagged out in TN one year with four in four days and then wouldn't you know it they outlawed it. 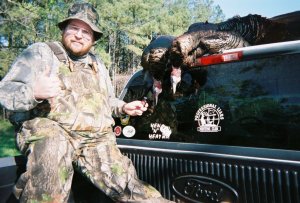