Our family was in Colonial Williamsburg earlier this week and I spent a long time at the Gunsmith shop talking with the folks there. I had no idea the work that went into the early flintlocks made here during the colonial period. It was interesting to see the forging process as well as the reamer, and rifling tools. According to the man in the shop, there was no standard “caliber”. They were still made on the “gauge” system with the gauge being the same thing it is with shotguns, the number of lead balls needed to equal a pound. He said each gunsmith made the guns as a custom piece with the gauge being negotiated with the customer. The customer was given a ball making device and that was that. No interchangeability, tota The smith said that a gun would take about 400 man hours to make. You can still order them made by hand with the tools and techniques of the 18th century but the wait list is years long, and the price is in the neighborhood of $20,000.

Beautiful pieces, but not worth that to me.

It got me to wondering though, what are some decent modern reproductions to look at? I have not muzzleloader hunted in the past, but I am interested in it. I know a modern in-line would be the simplest way to get into it, but those flintlocks really are a fascinating tool. I see Pedersoli offers a number of options as well as Thompson. What is worth looking at?

Well, I'm a snob when it comes to muzzleloaders, never bought a factory made gun simply because I knew they didn't really resemble the originals...Order the book FoxFire 5, it has some great info on American Longrifles...I bought my first in 1977 from Bob Watts, he is one of the gunsmiths featured in the book...It was a .45 and I used it for deer, squirrels and competition until the late '80s...I had a bear walk up on my while hunting one of our farms in Gates County and I decided right then to build a .54...This I did and still use it to this day...I rebarreled the .45 to a .40 and use it for squirrels...

Those who have never shot a properly made flintlock have no idea how reliable and accurate they can be...Another point...Previous to the American Revolution there were very few barrels or locks made here, they were shipped in from England...So, most "gunsmiths" were actually gun stockers back then...

I give talks on Colonial America and show how flintlocks work, love the reaction from those who have never seen a flintlock go off... 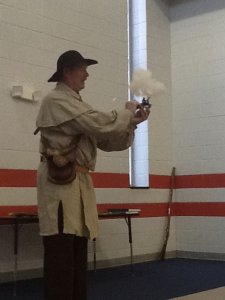 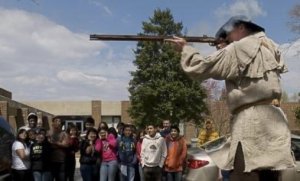 DP guns are some of the best of the repops today.
If you dont want the flint and want to go more like the Civil war guns they do them very nice.
Have several of their guns and been happy.


If this is your cup of tea let me know. I can get you on the line shooting cannons, mortars and all types of civil war small arms.

Most all our shoots there is free on site camping.
I really like flint but there is something to adding the civil war guns and also being under time to get 2 to 3 rounds off a minute in a match and hitting the target.

Deerherder,
Come to the "Cold Toes Rendezvous" on January 25-26th, and one of us will hand you a flintlock longrifle or fowler, probably handmade by the owner or by well-known shops like Tennessee Valley Muzzleloading in MS. There's a place for Italian factory-made longguns as they range from $600 to $1,000. American-made finished longguns will start at about $ 1,200 and go as high as one wants. We have about a half-dozen custom gunmakers here in the state, one of whom will likely be at the Rendezvous.

The Rendezvous is open to visitors to watch or participate. It will be held at the Lafayette Long Rifles Range at 400 Flintlock Lane (at the end of the lane), Fuquay-Varina 27526. Come either day or both days. Primitive camps and modern camp space available. I believe they will run the "Woods Walk" on Saturday. Folks come from Asheville to Jacksonville, and everywhere in between.

I will have tables at the Greensboro Gun Show this coming weekend at the Coliseum and at the Dixie Gun & Knife Classic Gun Show at the NC Fairgrounds in the Jim Graham Building on January 18th-19th. I'll have a couple dozen black powder guns for sale, pistols, C&B revolvers, flint fowlers, flint & cap lock rifles.

Hope to see you at the Rendezvous. Hard to pass up an invitation to shoot a flintlock rifle for free.

What city are you nearest in the eastern part of the state?

Thanks for the responses fellas.

The rendezvous sounds like a neat event. It looks like I’ll be in Garner already that day, so I will try to get over there for a bit.

I live in Greenville & hunt mainly in Wilson or Kinston.

I got into "custom built flintlocks" in the last couple years. Even went to the Contemporary Longrifle Association's (CLA) annual show in Lexington, KY (2018 and 2019). There is a HUGE following for contemporary/custom longrifles/muzzleloaders.

Here are a few websites with helpful information/members:

The individual that built the featured Kentucky Longrifle for the CLA's 20th anniversary annual show (in 2016) built a custom longrifle and pistol for me. My flintlocks are patterned after flintlocks built in the Lexington, KY, area during the early 1800's. The builder's name is Mike Davis. Mike was also featured on the short-lived TV series Master of Arms (he won the episode he was featured in and pocketed the 10K prize). Master of Arms was similar to Forged in Fire.

Here is an article featuring the rifle from the 2016 CLA show that Mike built - http://www.contemporarylongriflefoundation.org/fundraising/2016-fundraising/late-kentucky-longrifle-rig-by-mike-davis-gary-tingle 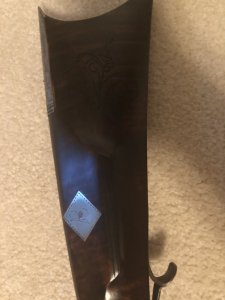 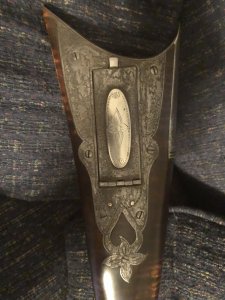 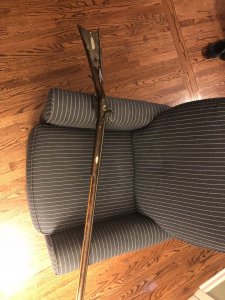 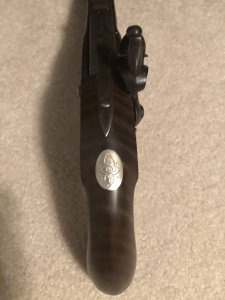 Well, JayDB, you need to come to the Rendezvous for sure, as you’re an hour away or less. We have a few gunmakers in our club who should be there, plus a couple fellers, nationally-known for powder horn making. Lot of talent in our group for the traditional hunter and target shooter.

Deerherder said:
Thanks for the responses fellas.

The rendezvous sounds like a neat event. It looks like I’ll be in Garner already that day, so I will try to get over there for a bit.

I live in Greenville & hunt mainly in Wilson or Kinston.
Click to expand...

Deerherder, there's a muzzleloading club about a hour and a half drive southeast of you between Garland & Rose Hill. They get together at their club range on the third Saturday every month. Check out the "White Oak River Longrifles" online or on Facebook. A number of them are hunters come from the Hubert/ Jacksonville area. Real nice folks.
You must log in or register to reply here.
Share:
Facebook Reddit Pinterest WhatsApp Email Link
Top