If you don't have antler sheds, what can you use to mimic the sound of deer fighting to lure a buck?

Me and my buddies are planning on doing an amateur deer hunt in some private property, but we don't have sheddings to use. Is there anything we can use to mimic the sound?

I would've never guessed this. Thanks

I made a rattling bag back in the '80s, wooden dowels, 5-6, about 12 inches long...Take 2 and sand or cut about a third of the side off (flatten) on both sides...Put in a wool sock, tie off the end and rub them together between your hands...

Frankly, I have had better luck with The Can and Buck grunts on calling deer...

If you use sheds with brow tines, remove them. They are a finger nail killer. But, if deer respond to "OH..S×+T..DA÷N that hurts", they should readily come in. Don't ask. lol. I got a bruise under a nail. Didn't have to burn a hole in my nail, but it was painful!!!!

Rattle bags work. Called in 5 bucks within a 45 minute window once. I rattled twice during that time ans they all came in looking...

You can buy sheds also, cabelas I think online. Or.. shoot the next basket rack buck ya see and get the real deal. I rattle with what was a 7pt.. like other fella said.. watch those brow tines

Put some rocks in a can….cheapest set of horns I know of.

I must suck at this deer hunting thing. Never once have I had a deer respond to a call of any kind.

HotSoup, roll a can over in bow season and you will see them. Got one have been using for years that had to replace the latex in few years back. Had a Bobcat show up under stand few days ago after rolling it….heard it and thought it a fawn proof they after them.

OP is my young hunting buddy you’ve heard all about. So he is the kid

I constantly use a can call and it works.

YanceyGreenhorn said:
OP is my young hunting buddy you’ve heard all about. So he is the kid

idk if they even have pencil cases now with all their high tech new fangled doo dads and their tiktoks and their twittin and tweetin
Click to expand...

So steal "a" kids pencil case then lol - dont be doin that
and with all the doo dads and stuff, am sure there's an app for that

HotSoup said:
I must suck at this deer hunting thing. Never once have I had a deer respond to a call of any kind.
Click to expand...

I’m right there with you. I’ve never called in a deer with a rattle bag or bleat can.

I have called in deer with real rattling horns, a bag, and grunt tube. Not often, but a few times.

Contributor
There are lots of options out there. Rattle bags, rattle boxes, imitation antlers. Here are just a few of the options available. Ultimate Calling System by Illusion: What makes it the #1 deer communication system on the market? The Extinguisher’s patented ModiSlide™ allows you to sound like a Buck, a Doe or a Fawn in an instant. 99.6% Approval Rating – NAHC Field Test, highest ever by a deer call! FreezeFree™ Design –...

Contributor
Don't know how true it is because I never had any luck rattling but it makes sense. Only rattle when bucks are fighting in your area which is usually pre-rut. It makes sense to me that deer would shy away from an unnatural sound.

This time of year I would go for quiet over rattling. Always have had better success rattling just before the rut.

Homebrewale said:
I’m right there with you. I’ve never called in a deer with a rattle bag or bleat can.
Click to expand...

Ive had alot of luck with a grunt tube, but I have never seen where "the can" did anything.

Contributor
Deer calls have different effects on different deer, even within the same group. I've proven that to myself countless times over the last 40 years. Watching groups of deer while rattling and using a variety of calls, some deer will ignore, some will run away, and some will run toward you. The buck in my avatar came running in to a canned bleat call on opening morning of Eastern gun season in 2010.

In general, rattling works better in mornings, according to my own experience and what the QDMA says. I have killed 8 pointers that responded to rattling, but for me it seems much more likely to attract smaller bucks, and an occasional doe in heat.

It’s one of those deals that are useless till they aren’t. A prime example of how our personal bias means nothing to the deer.
you couldn’t pay me to use a can. Just my negative bias. I need to change that.

Contributor
Regardless of what you use, don’t expect to see results like you see on TV. That’s just not a realistic expectation in “real world” hunting situations.

HOWEVER, using the right call on the right deer at the right time will yield results. A couple years ago I had a buck that was pushing does around and just wouldn’t slow down or stop. I tried a grunt call and he paid it no mind. I tried a can call, with no effect. I finally tickled my rattling horns together and he stopped and started trotting towards me. Eventually he worked into just over 300 yards and I let him have it. 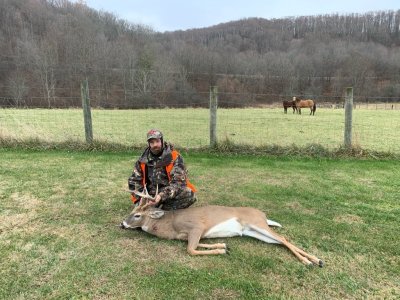 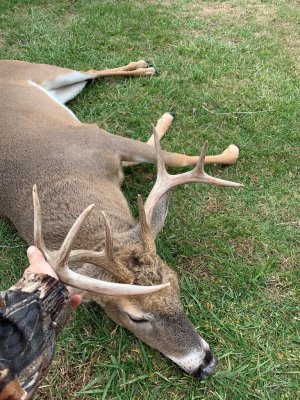 Contributor
I’m only into my eighth season, so I certainly can’t compete with many of you regarding experience. But I have a set of 4-point antlers I’ve been using and I’m starting to think it’s been helpful. I was hesitant to use them, I thought it was too much movement and figured I wouldn’t do it right and they could tell it was me. I wondered if I was just running them off. But now that I’ve killed three within a few minutes of rattling, I’m starting to have some faith in it. Never tried a can or anything else.
You must log in or register to reply here.
Share:
Facebook Reddit Pinterest WhatsApp Email Share Link
Top