Contributor
8 :08 am
Got him on camera in this field on Dec. 22 and 26. He disappeared after Halloween but came back before Christmas.
Sad daddy buck down in Harnett County 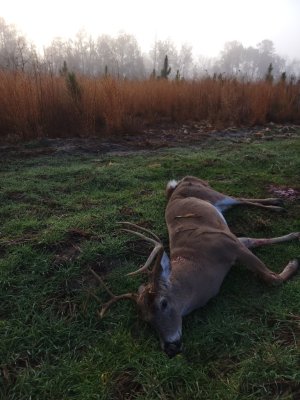 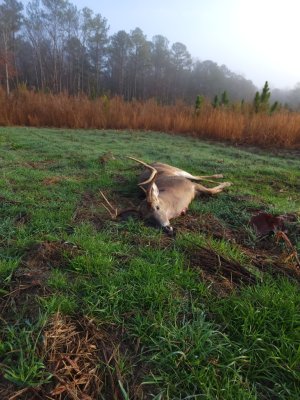 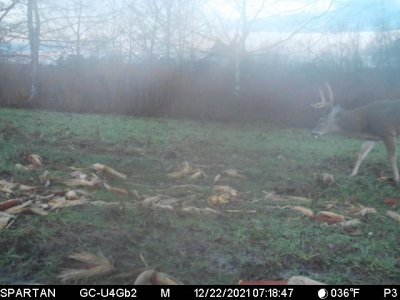 Contributor
I was literally about to get off the stand

Wow. Nothing better than a December buck! Congratulations

Congratulations Jug- That is very hard to do imo- kill one specific buck. Great end to a season!

Contributor
Thats a nice one. Congratulations

Contributor
Just read the daily thread. "Should have stayed in bed"

Contributor
A nice last of the season buck - Congratulations!

Awesome buck. Thanks for sharing. Happy New Year to you!

LR308 said:
Just read the daily thread. "Should have stayed in bed"

I had thrown my jacket out of the stand and water bottle and was getting ready to leave when he came out. I was pissed off cause I couldn't see Jack.

Contributor
Awesome man……3-4 years ago I had a similar thing……last day 8:30 in the morning one I hadn’t seen in more than a month pops out right in front of me, honestly I was so stunned I had to remind myself to shoot.
Last edited: Dec 31, 2021

oldest school said:
Congratulations Jug- That is very hard to do imo- kill one specific buck. Great end to a season!
Click to expand...

Yes sir . I took some advice from the best deer hunter I know, here in Harnett County. That old timer should be in Carolina Sportsman or the NC game and fish but he won't let them do a story on him. He has 1400 acres leased here in Harnett and leases an entire ranch in Missouri by himself and if that ain't enough he owns a ranch in South Texas with another man..
Believe it or not he kills his biggest deer here in Harnett and in Missouri . He told me that when that deer left either he was getting too much pressure or he was going somewhere nearby to hang around and breed does. He told me not to hunt that stand much till I got another picture of him,,, and I didn't. Deer came back just like he said the deer would, once he ran out of does or figured the pressure was off.
Last edited: Dec 31, 2021

Contributor
Congratulations on a beautiful buck, great way to end the season!!

Can you stop waiting till almost the end... Congrats great buck

Great buck Jug and they are smarter than we give them credit when it comes to pressure put on them, especially a mature buck and an old doe … another killed him first time had been in that stand in long time.

Thats a real nice buck buddy.
You took it down to the wire on that one but it was worth it

Yep, 11th hour and 59th minute mark on that one. Congrats on a beautiful buck!