How to cook a backstrap 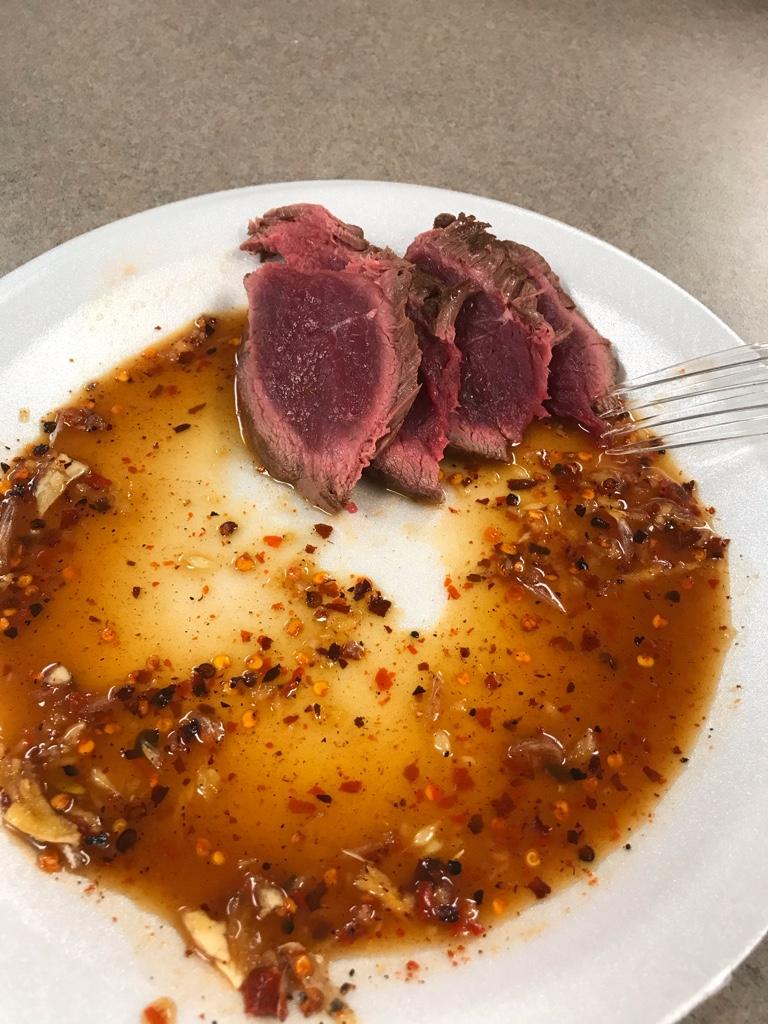 Just give it a good sunburn

Contributor
I'm sorry, I just can't eat it like that. I don't care how good y'all say it is, I can't do it.

darenative said:
Just give it a good sunburn

Just warm up the kitchen, and walk it through.

I kind of expected that sort of blasphemy coming from a man that puts wet goobers in his mouth....

Just wash it down with some Bud Light.

I like it about medium. If it's still grunting when I bite into it, it needs another min or 2

Sent from my SM-N950U using Tapatalk

Me either. It’s got to be cooked.

kilerhamilton said:
@banjo - that is cooked - see the char on the outside?

Sent from my iPhone using Tapatalk
Click to expand...

Tell me about the sauce! What kind is that?

......Or is it the notorious Italian dressing?

KrisB said:
Tell me about the sauce! What kind is that?

......Or is it the notorious Italian dressing?
Click to expand...

That appears to be the nefarious
“Eye-Talian Dressin”

KrisB said:
Tell me about the sauce! What kind is that?

......Or is it the notorious Italian dressing?
Click to expand...

I am with you DC Bigdaddy, I like to cook the grunt out of him at least.... 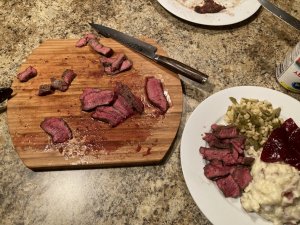 Looks good. Just shine a bright flashlight on it and it's done.
Joe

Contributor
I’m out. That thing is still running through the woods.

Y’all fellers that won’t eat that prolly like Chick-fil-A biscuits and seltzer beers don’t ya?!?

bwfarms said:
For the record

I like mine twix this and the original. I would err on the side of this. Rare, not raw, but certainly more raw than well.

I'm not even sure what I just said...

BarSinister said:
I like mine twix this and the original. I would err on the side of this. Rare, not raw, but certainly more raw than well.

I call it a well done steak

Drives my mother in law mad because she prefers cardboard.

bwfarms said:
I call it a well done steak

Drives my mother in law mad because she prefers cardboard.
Click to expand...

I cook mine to an internal temp of about 140 degrees. It's still a bit pink and juicy.

If I can, I get a grill as hot as possible and it’s still purple inside. Rare if you use the knuckle test.

My preferred these days is to cut it into 5” lengths the width of the back strap. I’ve a sort of in depth recipe but I “brown” the outside so to speak in a hot oil skillet with Poblanos and onions. I’m very careful “frying” venison. Y’all that fry it or make it into cube steak are beyond my palette.

Anyhow, once it’s brown and still dark purple inside slice it perpendicular to the grain. The secret in our house I learned in Culinary school a few decades ago making something else. Keep your skillet hot, then toss a wrap in it. Wait until it “puffs” up nicely and flip and do the same. The air pockets expand and you get a partially crisp, lighter, fluffier wrap if that makes sense. It’s really not a fajita I guess at that point but it’s much better than flat wraps.


On the straps themselves if your cooking other ways beyond the Fajitas I mentioned think tomato based not vinegar/dressing based. If I hear someone throw “Seasoned Salt” and “Italian Dressing” in the same sentence as venison I’m not touching it. I’ve not been to any wild game dinners though or others houses in a long time for venison so I get to enjoy mine and not rawhide somewhere else.

A good quick marinade would be A1 NY Steakhouse marinade. Tomato based marinades do something sciency to the meat enzymes maybe from the acidity. It doesn’t cover the wild taste it changes it to a very unique and enjoyable flavor.

I actually don’t enjoy “Gamey” meat or even strong fish. I used my full set of tags every year in NC to feed the family and learned how to cook it.

Also, might sound like blasphemy to some but I’ve been known to make Jerky and sausage from back straps. With 4 kids we eat spaghetti and other things way more often than most anything else.

bwfarms said:
For the record

This is how I like it. I'm with DC BigDaddy I can't eat it cold and blue like the OP.

I am with you DC Bigdaddy, I like to cook the grunt out of him at least....
Click to expand...