Grandson's First Bow Kill and it's a nice velvet 12 pointer

Contributor
It's been a long road for my grandson to take a buck with a bow. When he was 7 or 8 he took a small buck with a gun with his other grandpa and that is all the only other buck he had shot. He is one of those young people who is hyper active plus 2 and that has hurt him in the stands he hunts. Last week when Skylar and I was scouting looking for sheds we jumped this buck running with one a little larger. We had a ladder stand close by we hadn't used in years so we cleared out a shooting lane to an old fence for a 30 yard shot. We placed a camera and saw a lot of buck activity, but never saw this buck. Yesterday evening I was cleaning up around the hunting house and a Noah called me about 6:30 and asked me to come and help him track a buck he shot with his bow. When I got there he showed me where the group of four bucks were standing when he shot his, they had been feeding on persimmons. They were behind him, behind a brier patch and luckily he had a small window clear through some trees for a good shot. He directly me to where the buck was standing when he shot and I found the arrow. The Muzzy 100 grain had a clear pass thru but there was not much blood on the fletching which worried me. Noah showed me where he ran, and there was not one drop of blood that I could find. We started making circles and soon got discouraged as it was getting dark. I believe in the power of Prayer and I asked for help on this creature of God with the promise to donate some of the meat to a needy person. In less than a minute, I found the buck in a small grove of persimmon trees. I called Noah that I found the buck and the grin on his face tells it all. 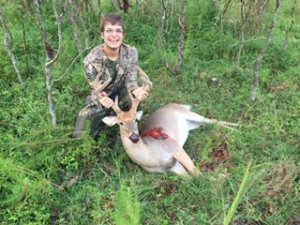 Contributor
Congratulations to you both, that's quite an accomplishment.

Great job to you both!

Contributor
Very nice. Congrats to both of you

Contributor
That's awesome! Good on the young man for a good shot and good on you for helping him take a great buck!

Congratulations on a nice buck!