Gobbling Report: What are you hearing?

Contributor
Not hearing much but saw 7 longboards with 16 hens today. Looked like a winter flock

Heard 10-12 gobbling this am. Woods was on fire. Then had two more gobbling like crazy at 9:40 in another block.

The next turkey sound(not made by me...) I hear today will be the first...I’m glad NC/VA opens Saturday cause I’m bored with GA for right now

Hell little man said he wanted to sleep in... went at 1 and when he shut the truck door one shock gobbles 25 yards away... quickest hunt we've was a nice 2 yr old bird... didn't get a pic of him with it bc my phone was dead

m704 said:
I hope that wasn’t in Uwharriei the woods will be full of hunters again this spring
Click to expand...

How bad is the hunter pressure in Uwharrie during turkey season?

pm311 said:
How bad is the hunter pressure in Uwharrie during turkey season?
Click to expand...

Thanks to Covid-19 and Youtubers it was bad

Took 7 miles on the boots this morning, but was able to drop a couple more pins today.

Contributor
Heard 2 down on the creek yesterday morning. They only gobbled for maybe 10 to 15 minutes. This morning only 1bird gobbled way off.

Had one or two couldn't tell not gobble on the roost, and then continue to gobble from flydown to 11am. They were both on an adjacent property, and had hens . 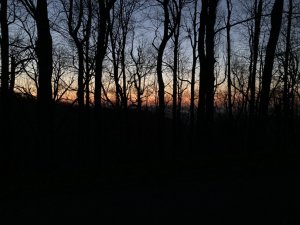 46* and crispy calm here.
listening from a closed BRP

Keep us posted as usual.

No turkeys yet. Two grouse.
and I could turn a heck of a bowl with this burl 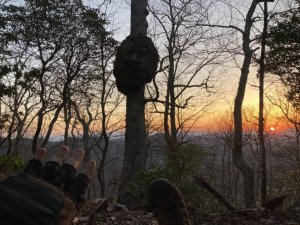 appmtnhntr said:
No turkeys yet. Two grouse.
and I could turn a heck of a bowl with this burl
View attachment 63959
Click to expand...

Still winter up here. Birds have been low on what little green there is. Highest I’ve ever shot a bird was 4,050’ in Boone.

Gobbling on the roost in Anson... very few and random gobbles since flydown

Thankful to watch another sunrise and spend time w my daughter

hoping she smacks one today

They been silent most of the week.Got one of my boys in sandhills this am, silent but on fresh sign,seen a few yesterday .same area,SC has been about the same silent gobblers come in. Chesterfield is decent but not doing much.heaeded back to union co. After next week, Hope some changes or I'm a have to start hunting Uwharrie where I'm used to silence.

I ain’t heard one hollering yet this year

Well I know where 3 are right now but come Sat who knows 2 gobbled real well roost and still going when I left at 0710. Still dead winter where was at all 3 together and sign says still feeding as if winter.

QBD2 said:
I ain’t heard one hollering yet this year
Click to expand...

Very strange but just had a bird (10am) come from 100s of yards away gobbling.... got within 80yds and gobbled.

would not answer a call... was moving very fast and went way past us last time we heard a gobble

Saw two strutting on the pasture down the ridge from the house earlier. Might have to kill a house bird if I can’t find me one to play with Saturday.

Contributor
Was in East TN this weekend for the opener on NF land....ummmm I mean, the kiddo's Spring Break. Heard a lot of gobbling on the roost, and several birds gobbling consistently until 1100 or so.

THUR: Listened for birds gobbling off the roost from the porch of the cabin. Heard 3 for sure, but the weather was pretty bad and the creek was running so hard it affected what I could hear.

FRI: Had 2 birds within 100yds gobbling @ 0900 Friday before season while scouting...I yelped with my mouth and the responded hard and I had to get out of there quick! Had another I got to within 100yds on accident before I heard him drumming. Loudest drumming I have ever heard...or rather felt! Covered 9mi Fri morning, and ended up finding the birds i would go after at the end of my loop less than a half mile from the front door.

SAT: Had birds gobbling in every direction and the one I set up on came within 75, but had hens between he and I and I could not call for fear of getting busted by the hens. He gobbled his face off from roost until about 0745 when he followed the hens off the point and down into the bottom.

SUN: not as much gobbling, but pretty good. My bird didn't gobble a peep though, just slipped in quietly (I'll post the account up later).

TODAY: Heard gobbling from the house (N. Guilford Co) and saw a strutter on the way in to work. They were strutting pretty good in the afternoons early last week before we headed to the mountains.

Birds were on fire Saturday and Sunday mornings in Scotland county. We left them gobbling sat after a successful youth hunt. I think we heard six Saturday morning and at least that many on Sunday.

Checked out a small spot about 10;30 in Stokes co. Was not going to call any, but I did . One sounded off from a distance and came closer , gobbled about 5 times ,and I think he would have came in. But who knows . Looking forward to next week.

Friend with daughter on youth hunt on Jordan. Not one gobble until 12:30pm but he'll never gobble again.

Very slow morning (compared to Saturday) in Caswell County, had 2 gobble on the roost right near the parking lot, I set up, never heard from them again. When I moved on down the main path I heard one gobble in a spot I deer hunted a few times so I took my route to get there and once I was there, he gobbled where I just was 20 minutes previously. I creeped on the side of the ridge very slowly for 5-10 minutes and he sounded off again. He was at most, 75 yards away. I set up against a small oak and let out a few of the best yelps I've done. He gobbled and I saw his bright blue head and him strutting doing his dance in a flat stand of oaks that had been burned probably 2 years ago. I kept silent, thinking that was a good move and watched him shuffle off strutting the whole time and gobbling to add insult to injury. I called again but louder than before about 4 minutes after I lost sight of him and he gobbled probably 200 yards away. I got up and slowly headed that direction until I stopped to crow call after moving 100 yards and he shock gobbled 400 yards away. On private. First time seeing a hot gobbler so that was cool. First time getting laughed at by one too.

^Hide the hen. He knows exactly where that call came from, and you now knows what happens when he don’t see that ol girl...