Homebrewale said:
From the mets at work:

Over the past few weeks, we have been monitoring some planetary-scale atmospheric developments that could eventually yield an active winter weather regime over the eastern U.S. It now appears this anticipated winter weather pattern may be in the process of coming together and may continue to progress into an increasingly cold and potentially active one over the next couple of weeks.

With the above in mind, don't be surprised to see an increasing number of winter weather-related emails and forecasts over the coming days. Also, now would be a good time to revisit winter weather preparedness plans.

Currently, we are tracking the threat of wintry weather for two periods: Friday, 1/8 into Saturday 1/9 and Monday, 1/11 into Tuesday 1/12. Beyond this period, additional threats may develop if the pattern evolves as currently anticipated.

As these first two systems come into better focus, we will continue to provide more detailed analysis through the week. We plan to issue a detailed outline of the 1/8 to 1/9 system tomorrow, with a forecast accumulation map likely to follow on Thursday. Additional details on the possible 1/11 to 1/12 event will be transmitted as warranted.
Click to expand...

There is but I can't figure out how to post the graphic inside the email.

Homebrewale said:
There is but I can't figure out how to post the graphic inside the email.
Click to expand...

Give us the short version.

Our clairvoyance in the details of this event is slowly increasing, but there remains a great deal of uncertainty with potential snowfall accumulations east of the mountains and foothills that will be difficult to pin down until the event is underway.

Confidence remains high that 3 to 6 inches (with localized higher amounts) of snow will accumulate in the mountains and foothills (the "pink" region) where lift will be greatest, and temperatures will remain cold enough for snow throughout the duration of the event.

It also appears that precipitation should remain mostly snow in the northwestern and central Piedmont (the "blue" region), but there is more uncertainty here regarding how much precipitation will fall. If the storm system were to track a little further north, this region could end up on the higher end of our forecasted amounts of 1 to 3 inches (with localized higher amounts), but if it were to track a little further southeast the amount of precipitation reaching the area could be reduced and snowfall totals could be on the lower end of our range.

Now we come to the light blue region - by far the most challenging. This area will be the most borderline with temperatures but could also see the most precipitation from a band that redevelops during the afternoon and evening as the storm is pulling away.

Initially, precipitation especially in the southwestern and western portion of this zone (Charlotte to Raleigh region) could start as snow, especially if the initial bands of precipitation are more intense and/or arrive earlier than anticipated (more on timing below). If this occurs, a quick slushy accumulation could occur, primarily on grassy and elevated surfaces. Precipitation in this region should changeover to rain by mid to late morning, and it's possible that there is a lull or only light drizzle that falls for during the midday to early afternoon period.

During the afternoon and evening, an intensifying band of snow is expected to develop in the western piedmont and begin to sweep east across the state. This band has the most potential to produce snowfall accumulations in the light blue region, but the precise strength, size and track of this band remains uncertain. This band could produce 2 to 3 hours of moderate snow at a given location, with accumulations of 1 to 3" possible. As a result, we want to stress again that there will likely be "snow islands" -extremely localized areas of higher snowfall accumulation where a band of heavier snow develops, as compared to other locations just miles away, which could have bare ground. These areas may be most prominent in the light blue area of the map but may occur all across the state.

Snow showers will begin to develop across the mountains and foothills around midnight tonight and quickly increase in coverage and intensity. For the rest of the Piedmont stretching back to the Raleigh area, precipitation (snow/sleet/rain) is expected to rapidly develop after midnight tonight from west to east with rain likely along the I-95 corridor and east by sunrise tomorrow. Snow in the mountains and foothills should begin to diminish by mid to late afternoon tomorrow, with the previously discussed band of snow continuing to push east through the Triangle region between 6 and 10pm tomorrow. For areas along and east of I-95, the band of precipitation is expected to sweep across this region after 10pm through the overnight hours tomorrow into Saturday and precipitation should have exited the coast by sunrise Saturday.

Roads in the mountains and foothills are likely to become snow-covered and treacherous overnight tonight into tomorrow as temperatures fall to at or below freezing and snow quickly accumulates. For all other locations, it appears temperatures will remain just above freezing for most of Friday (warmest south and east) and so most snowfall accumulation should remain on grassy and elevated surfaces, with roads primarily just being wet and/or slushy. Overnight Friday into Saturday temperatures may barely fall to near or just below freezing (especially in the northwest Piedmont), which could result in a few slick spots where the most snow falls, but overall roadways are not expected to be severely impacted from this event outside of the mountains and foothills.

Use your imagination for the map.

Homebrewale said:
Use your imagination for the map.
Click to expand...

Homebrewale said:
Use your imagination for the map.
Click to expand...

Great write up and captures the uncertainty pretty well.

So how does that line up with what you expect?

Specifically what do you think about that wintry mix strip that goes across catawba county?

Sent from my SM-G781U using Tapatalk

Papa_Smurf said:
So how does that line up with what you expect?

Specifically what do you think about that wintry mix strip that goes across catawba county?

Sent from my SM-G781U using Tapatalk
Click to expand...

You might start off with some sleet and rain and snow all together....then go all snow, sometimes this takes a few hrs other times a few minutes....the changeover times west of you so far today have been pretty fast...a few models really amp up totals over the foothills etc....I have seen runs with as much as 5-10" over your neck of the woods....not sure thats gonna play out but the potential is there....it really depends on how well the cold air holds together after daybreak....basically at 32-34 degrees even though 5-10" fall you only ever have 2-4" slushy compacted inches on the ground due to melt etc.....this stuff will stick to everything though so its gonna look awesome. I think your good for 2-4" of accumulation, 4-6" if things go just right and you can keep temps around 30-32.

Sitting down here at our house in surf city and the sun is a shining. Might go try the trout and see what they are up to.

seeing some moderation in temps for the 14 day out forecast from earlier estimates.

What's the latest? Really looking forward to some serious cold

I probably jinxed it. Just put new tires on the truck. Couldn't stand the though of being trapped at home

Yeah for some reason I couldnt access the site for a few days......as for your question the pattern change is happening and there is going to be a lot more chances of snow for us....models do not do well with pattern changes so until the pattern change has leveled out some the models will continue to be wishy washy and very changeable. Starting around the 18/19th we should see a storm every 4-5 days as the southern branch of the jet stream looks to be very active, then its a matter of getting the cold air in place and timed in with the wet....that is always the tricky part around here.

Could be another light snow shower event this weekend on Saturday, mostly central and western NC. Then the pattern relaxes a bit and we could see a warmup around the 20th so you golfers might get a few good days with highs in the 60's to maybe even 70......that will be followed by a more significant period of cold stormy weather to end the month....the models do seem to not show a lot of what is known as cross polar connecting though....this is what allows the real deep bitter cold over Siberia to make its way over to this side of the world.....if that does not happen then while we will stay cold we would not see any of the really insane cold ( still will be below normal just no multiple day period below freezing pipe busting cold ) anytime this month....

The EPS from overnight really cranked up the snow chances.

Contributor
Northeast Caswell... goes good with listening to a pack of beagles.

Geez Oldest School special in the fantasy range on the GFS.......this storm or a variation of it has been popping on and off the models for week or so....seems likely we see something like this happen towards the end of the month....though probably not with such ridiculous totals.....we call these clown maps but they are fun to look at.... 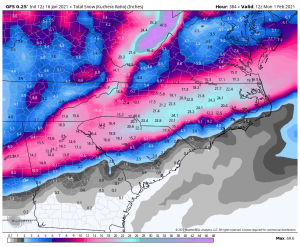 Hope these pattern projections work out

Yeah bring on a big one.

thumbs up on it being a clown prediction.
f a blizzard.

oldest school said:
thumbs up on it being a clown prediction.
f a blizzard.
Click to expand...

Well the models are all over the place. Run to run continuity is garbage right now. For example yesterday the 12z gfs was bringing us snow and today it has that storm hitting IA, MN, WI so go figure.

Shaggy said:
Well the models are all over the place. Run to run continuity is garbage right now. For example yesterday the 12z gfs was bringing us snow and today it has that storm hitting IA, MN, WI so go figure.
Click to expand...

lets go with your bro on this one. Clown Clown Clown.
That deal would be a drama past a hurricane.

oldest school said:
lets go with your bro on this one. Clown Clown Clown.
That deal would be a drama past a hurricane.
Click to expand...

Count me in. I would love some decent snowfall.

hunter said:
Count me in. I would love some decent snowfall.
Click to expand...