Finally made it out on a short archery Elk hunt this past week. It is funny how life gets in the way. I had plans to clear September to live in the woods but family coming to town, work, and being a new homeowner all combined to foil that plan.
I ended up meeting a guy out here who has recently gotten into archery and had a good plan to archery hunt above where he has been rifle hunting. We looked over a few maps and came up with a plan and a camp spot to hit this area for a few days. It is a 5 miles ride in on ATV and a 1.5 mile hike to where we wanted to hunt. We rode up to 10,600' and made camp in a saddle along a ridge that was about a half mile in and still gave us a good glassing spot. The next morning we were glassing at sunrise and spotted a bull working into the timber. This confirmed that the elk were there and using the top of the mountain.
The plan was to hike the ridgeline to the last peak. The elk were feeding and watering on the south side, working their way back up in the morning into an aspen draw that lead to a saddle roughly 200' below the summit an wrapping around the north side to bed.
We made it over there and were greeted by a spike and maybe a cow, hard to tell in the timber. The spike if legal gave a great shot. We spent that day confirming all of our suspicions and feeling pretty good getting on them right away.
The hike back to camp isnt much fun since we lost 400' along the ridge so its a pretty steady incline for a mile mixed in with steep knobs. A few grouse helped to break it up.
The next morning we are back glassing and find another bull much lower an watched him follow the same pattern back into the timber. We now have a real good idea where they are going and judging by the sign on top of the mountain it looks like an annual spot for them. The bad part is that they are bedding is some real nasty stuff and not leaving until after dark.
No elk on the saddle in the morning but a cold calling session produced 2 bulls bugling from their bed. The sound threw me off thinking they were just below me, worked down the 25 degree slope in the timber only to be met with a 40 degree slope and the directly across the drainage from me. Called to them a little more and pin pointed their locations, backed out and worked to the head of the drainage.
Maybe we should have tried to really get down in the timber with them but they were bedding in one heck of a hole. Blowing them out trying to get close and the possibility of having to pack one out of there.....we opted to see if they would come to us.
Did a slow play calling session and god lots of chuckles back and eventually the closer bull got interested. He got directly below us and then kept working along the mountain until he was maybe 50 yds under us and 60yds or so to the right. This is all based on breaking branches as it was to thick and steep to see much. I gave him a cow call and he ripped a huge bugle right back.
It had been pretty windy for 2 days and the time was around 1pm. Predominate wind was in our favor but swirling, thermals here are variable, our location was good going up but some spots are so dark that they go down almost always. Anyway I think he winded us because after that bugle he vanished.
Like I said there is really no afternoon play here so we look around some more and head to camp to glass the side to see if any groups are coming out before dark.
Last morning, weather is coming in and we have some work to get back to. My hunting partner..................................................what do I say, he took me to a good spot BUT..... hes a converted rifle hunter, let the stereotypes fly here, he still acts like an old rifle hunter at elk camp. If we wanted a chance at these elk I told him we had to be at the back side of that saddle early, before they made it across to go to bed. Well this dude took an hour to get out of his sleeping back after I woke him up. I made coffee was packed up and ready to go and was like hey man the sun is coming up.
Finally get going, both of our legs are a little tired so the pace is a little slow, I am trying to hustle tho. We get to the last spot on the ridge where we can glass, I hit it real quick and there are 4 elk at the bottom of the draw. We gotta go! I pick up the pace, my partner not so much. I told him we need to be right at this spot ASAP.
Well we make it there, I crawled under some deadfall and take 3 steps, 5x5 staring at me in the exact place I said we needed to be. He whirls, and trots out of my life not to be deterred by any calls.
Man if he would have just gotten out of bed I am sure things would have played out much different. I don't think I could have drawn up a better plan based on what the elk were doing it was as sure as things get hunting.
Se la vie that's hunting and all in all it was still a good time. 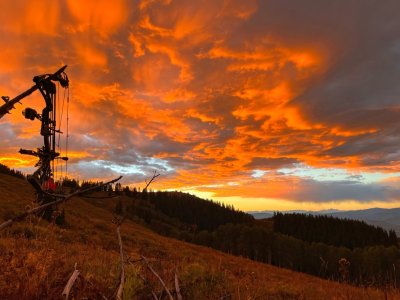 Turns out there are Elk under the rainbow. It’s landing exactly where they are. 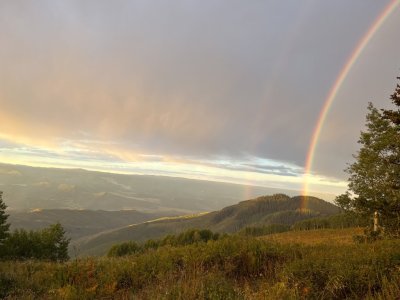 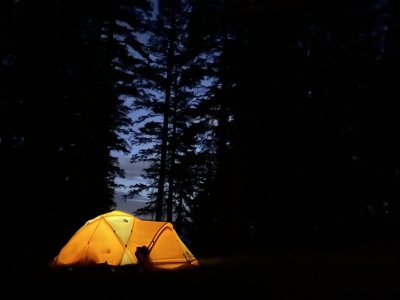 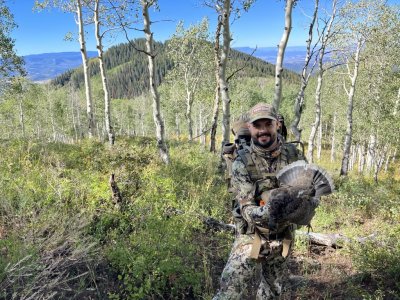 I don't disagree, It was a tough spot for me since he took me to "his" spot and I don't know him that well. If I make it up there again with him I am just going to be frank and say im leaving at 5:30 you can come or meet me there.

Leave the stragglers behind

Pretty sure I would have told him I didn’t do all this work to wait on him to get up and get in gear. Them elk won’t kill themselves lol

Steelshot said:
Pretty sure I would have told him I didn’t do all this work to wait on him to get up and get in gear. Them elk won’t kill themselves lol
Click to expand...

Or left him laying there. Go a couple hundred yards. Hit the elk bugle . Discharge a round. Then haul azz to the truck and leave him wondering what in the world happened

Contributor
Sounds like you still had an enjoyable hunt. I'm guessing that you were no on private land. If so, head back someitme by yourself. I'd bet you would come out dead tired of toteing meat.

lasttombstone said:
Sounds like you still had an enjoyable hunt. I'm guessing that you were no on private land. If so, head back someitme by yourself. I'd bet you would come out dead tired of toteing meat.
Click to expand...

It was still a good hunt compared to my last. Correct on public but definitely requires an atv or ebike to get to. Really wish I didn’t sell my atv before I moved now. I’m sure I could pattern them pretty well during the early part of the season based on the sign I saw.
This guy does have access to the bordering private and some gravel pits for goose hunting.

Contributor
So.... tell me about these grouse. How many did you flush? Are there a bunch of them out there?

sky hawk said:
So.... tell me about these grouse. How many did you flush? Are there a bunch of them out there?
Click to expand...

That’s what I wanted to know as well. I would travel further for good grouse hunting than an elk hunt.

sky hawk said:
So.... tell me about these grouse. How many did you flush? Are there a bunch of them out there?
Click to expand...

I have more grouse spots than elk at the moment. At this spot I flushed a few everyday in the same spot. Every time I have been out this season I’ve at least gotten a grouse.

Congrats on the grouse

Duckmauler dhc said:
That’s what I wanted to know as well. I would travel further for good grouse hunting than an elk hunt.
Click to expand...