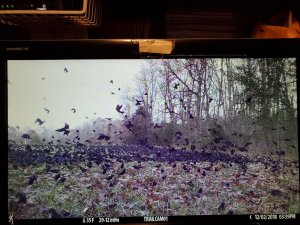 Wonder how many you could gt with one shot.

Sp8 said:
Wonder how many you could gt with one shot.

I recently found my corn thieves. 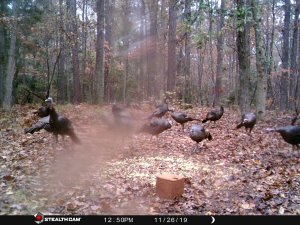 Contributor
Good place for one of these:

Have decoys and a FoxPro and willing to travel!

Dead Eye-NC said:
Have decoys and a FoxPro and willing to travel!


Sent from my iPad using Tapatalk
Click to expand...

Those are some kind of blackbirds not crows, they're passing through, they don't hang around as far as I know.

Sp8 said:
Wonder how many you could gt with one shot.
Click to expand...

At least bout 23. May know a guy who knows a guy that did it with a 10 gauge one time. Old timer who liked to eat em

May have known the same guy that gym reaper knows. He had a small black powder cannon. He would load it with shot and shoot it at a roost at dark. He said he could pick up a garbage bag full to feed his pet owl .

They are tough on corn, you ever watched a flock feed? They’re very methodical in the way they all set down, eat for a while and then move a short distance and set back down. Can get expensive quickly!

Alfred Hitchcock called and wants his movie props back!

Imagine one of those cannon launched turkey catching nets. That should provide Owl food for awhile.

Sp8 said:
Wonder how many you could gt with one shot.
Click to expand...

I'm going to tell you a story about that very thing.

My Father's first cousin who we'll call David since that was his given name was a jack of all trades and ended his working career as a finish carpenter working for Hatteras Yachts over near High Point. Following that he moved into an old trailer by a river in Sampson County and finished out his days fishing and hunting and telling some of the most outlandish tall tales you would ever hear.

In one of those tales he recounted a time in Robeson County when he was a shirttail boy and took his dad's 12 bore single, slipped into the end of a drainage ditch which went out into a field which was black with thousands of migrating blackbirds. He crept along until he figured he was in the middle of them, stood up and when the flock rose in unison he said he shot into them and killed so many that they covered him up and damned near suffocated him. Such was the caliber of the tales that David was known to tell. If anyone of you are ever down in Sampson and happen to stop in the store at Kerr Station on Ennis Bridge Rd. just off 210 just look around the wood heater and you'll likely see a shadow box with some of David's trademark items inside. He was a legend in that part of Sampson and is sorely missed by those who knew and loved him.
You must log in or register to reply here.
Share:
Facebook Reddit Pinterest WhatsApp Email Link
Top