To get ready for the season, I made a video from last year. Pictures and stories will start this weekend, we are ready 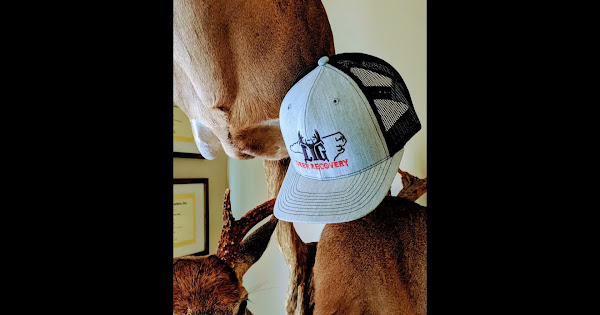 Looking forward to reading the adventures .

I always hope for clean kills with short blood trails but when you are needed I do love your threads.

I've been putting the word out last few weeks, visiting taxidermist, processors, and store owners of all kinds. Hopefully it means more people are aware of the service and less deer go to waste.

Will you be using the second dog this year? Or is he ready to track?

Remind me your coverage area?

flathead977 said:
Will you be using the second dog this year? Or is he ready to track?
Click to expand...

His name is Dachs, he is back up, or tracks for me and my son. Just being of quality breeding, he is better then average, even though we do small game all the time. But with these dogs it's not hard to find deer, it's not hard to impress people cause their drive. But even among the same litters you have differences. They aren't the same litter. The differences are in their tracking styles. Tracking isn't hard for either dog they just do it differently. Cooper is methodical and thorough even when it's easy, he can be fast but always wants to smell every hoof print, not air scenting until close to deer, doesn't want short cuts. Doesn't care if it's 3 hours or 23 hours old, still keeps style, less mistakes. Dachs wants to get to deer quick, will air scent if it can speed him up, wreckless at times and likes it hot scent.

STYLE seperates a good dog from a great (priceless) one. Coopers style sets him apart even amongst the best. So that the most difficult tracks can be successful recoveries. He makes it easier, to be a tracking team, he is tight to the line, and shows me every bed/bone/hair. He is easier for me to read, and shows me signs when deer is alive.

Nearly every person I meet it's the first time I've met them, they've exhausted all efforts to find the deer, some have grid searched, you can't bring a "good" dog to a contaminated 20 hour old trail that starts at a cornpile and goes through deer bedding and expect success. We usually bust deer off the cornpile when we arrive to the hit site. Then I have Cooper start there and he picks out the 20 hour old trail that hunters said had very little blood. Even with a "good" dog, people would be finding dead deer when you leave, instead I have Cooper.
Last edited: Sep 9, 2021

Contributor
I’ll be longbow hunting this season, so put me on speed dial!

Ive had two successful recoveries from the blood tracking group and advice from rook that I highly doubt I’d have ever recovered otherwise. I’m a big supporter of this service!

you are in for a treat. This thread will be as positive as anything regarding raleigh cooper is negative.
Continued best wishes and appreciation for your work @bowhuntingrook, Go Cooper!

oldest school said:
you are in for a treat. This thread will be as positive as anything regarding raleigh cooper is negative.
Continued best wishes and appreciation for your work @bowhuntingrook, Go Cooper!
Click to expand...

Yeah, I followed it last year. Had a lot going on this last month and when I glanced at the title I was not thinking "deer season". Love reading about his work. I learn a lot from that and watching videos of folks using dogs trained for this. I grew up dog hunting so we always had a few on the club that were good at finding dead or wounded deer. Just real neat to see it done a different way.

I hereby nominate Cooper as the official mascot of NCH&F.

Getting ready, Cooper is panting in the picture from anxiety when I brought out the tracking gear, running all through the house, thinks were goin now. Patience young grasshoppa 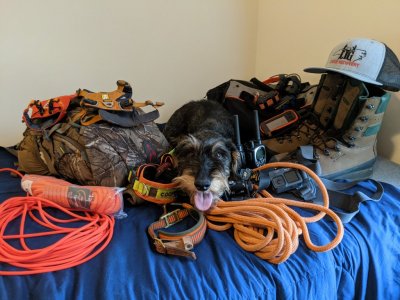 Getting ready for track number 2

Keep us updated. I love this thread more than anything else.

Looking forward to it. Looks like he got some lung. Did he not?

whitty said:
Looking forward to it. Looks like he got some lung. Did he not?
Click to expand...

1st track was a deer shot this morning, opening morning. Deer had smelled hunter and trotted off until the hunter called to stop it, hunter took crossbow shot from ladders stand while deer quartering away. Found arrow, not gut, not liver. Hunter aimed for liver but very little blood to follow they called me. This would be the hunters (also named Cooper) first buck. My Cooper, the dog, took the track and made quick work past last blood which wasn't far from hit, over a couple roads and creeks eventually totaling 500 yards as the crow flies. Hunters followed marking new blood, there were large gaps between but found areas where deer stood but no bed, even though it was only few hours old, any fresh blood had dried edges, we did not jump this deer and never found a bed. We jumped deer in a bedding area and my Cooper stayed the course finding more blood past this point. The blood appeared as muscle blood, I believe the alert deer ducked the arrow enough for the shot not to be fatal. A fatally hit deer, IF NOT BUMPED, should not go over 200 yards. This deer went through bedding and appeared to be walking. I don't believe this deer was bumped since the hunter was unable to advance the track past eyesight, less then 50 yards.

Track 2 was a deer that immediately went into a thicket, although is was difficult to move through, the hunter had done his best to do so. I know this because I could see the areas he matted down. Once Cooper was on the track, only saw a speck of blood past last blood. Cooper managed to get under the brush, I only had to untangle him twice and carried him over some stuff once and within a couple minutes Cooper had himself his first buck of 2021, a mature dark horned 8pt with stickers on the bases. The hole in the picture is the exit, hunter was in a treestand, this might be the best shot deer I've ever tracked lol. Congratulations bud.

Thanks again! Roller coaster of a day! Got busted by does walking in. They came back, busted me again but then this guy stepped out. I knew I made a good shot but a 3-4 year cutover is difficult to navigate. Thought maybe I would never find it. Called low to ground and Cooper made quick work of finding it! Then he got a truck ride to Hayes Taxidermy!

After my son arrowed one and we saw the dark blood painted arrow, we assumed liver and backed out. I got a call while we were looking and decided to take my son tracking while we waited, boy was that hard on him. Anyway, a friend called and had tracked a buck 150 yards with decent blood. I think the distance got him a little worried since the shot was a tad low and the location (on video) is one where it's either a really dead deer or a really live one. Picture doesn't show well low location. He decided to have Cooper run it, that way he was certain, when Cooper is on your track, its near certain. Fortunately after advancing 100 yards or so past last blood, we found a very dead deer. This deer died at a full sprint, got enough of an artery that it was a chip shot for Cooper.

Now, track 4. Me and my son assumed liver on his buck tonight, liver can live up to 6 hours. After looking and not finding much of a blood trail at all, we were hesitant to push it. I like to take my time early when sight tracking, unfortunately we had no blood for the first 30 yards the deer ran, that was as far as we walked. I also don't like to track with a dog on fresh tracks, liver should also wait minimum 4 hours. So me and my son went and found a friend's giant buck, and came home. Like most liver and gut shot deer that aren't pushed, this deer died within 150 yards. Cooper found him in his 1st bed withon 150 yards. This is my son's first buck, he has had so much let downs and bad luck with hunting deer it's not even funny. I will never forget his whole body shaking when we hugged after the shot. Proud moment. Yotes got to a ham before we did, that wasn't Cooper.

Awesome job! Cooper already putting in some awesome work on some great bucks. Congrats to your son!!

Not as anxious on this ride lol

I took 2 tracks Sunday, first one I was told the shot was high and back from a ladder stand. As a tracker, we like back, but we don't like high. The hunter tracked 150 yards tell blood slowed down. Hunter backed out considering the tracks difficulty and where he believes he hit. The track sits overnight and we start Sunday morning. Cooper blows past last blood in quick time and he continues confidently and eventually takes a 90 degree left turn and crosses a creek. We do this multiple times and when Cooper gets across creek he begins air scenting, I believe the deer spent a lot of time in this bedding. We advanced the track couple hundred yards but have nothing but blisters to show for it. Deer had many good opportunities to lay a die but did not, I believe it's a live deer.

The other was a buck shot very low. Deer eventually walking and going through normal activities.

Headed out in a few on what essentially could be called a cadaver dog training course. Gut shot from 2.5 days ago. Deer shot 8 minutes from my house, called a tracker I've never heard of who could never show, then grid searched. I might spend more time educating then tracking. 1 thing I can say that I can't say about half my tracks is, it's dead while I tracked it.
You must log in or register to reply here.
Share:
Facebook Reddit Pinterest WhatsApp Email Share Link
Top