Iron sights only in Colorado, right?
Click to expand...

He said his main was a .50 caplock Hawken; his backup was a .54 flintlock.

Contributor
I never had a doubt.

Contributor
Congratulations!!! A lot of work after he's down but that's all part of the hunt. I look forward to reading the story.

Iron sights only for mz elk in Colorado

Sorry for the hijack

Woodmoose yesterday: talk to y’all IN A FEW DAYS
Woodmoose today: elk down !

Aaron H said:
Congratulations!!! A lot of work after he's down but that's all part of the hunt. I look forward to reading the story.
Click to expand...

I'm sure he has "friends"...Blackhawk or Little Bird just happened to be "passing" by. lol. Bet he wishes...or is he laughing at us. lol

Man with a plan makes it happen,congratulations. I got to get out of cabarrus county more,need an adventure like that

Congratulations. Those things sure are fun to hunt and the big ones are overrated. That's a lot of fine eating there .

Thats a great picture! Thanks for sharing!

Congrats on the the kill!

You went, you hunted, you succeeded! That has to be so satisfying and addictive. Congrats on the bull!

Congrats woodmoose! Good to see one of us punched a tag.

He had that elk out before he left home.

Congrats on the Bull!!

looking forward to this story

you were right at the part where you found an elk that stripped over a long and died.

woodmoose said:
Came down the mountain 10 miles to get signal and call wife

Talk to ya in a few days
Click to expand...

I was hunting with a fellow I served with,,, he's a retired SF LTC who I have hunted with before (in NC, in PA, and in Colorado),,, good fellow

so we got camp set up on 9 September and spent the 9th and 10th road scouting, confirming where majority of camps were set up, and listening,,, I had 4 areas picked out,,, first two were a wash,,, no sign at all,,,

most of the hunters were in the Southwestern part of the area,,,, near a wilderness area,, the guy I was with wanted to move camp over that way, but I held off,,, I don't like crowds

on Saturday (opening day) he hunted over with the crowds,,, saw no fresh sign, said he "heard a bugle or two" but could have been one of the multitude of other hunters he ran into,,, since he didn't want to go back there on Sunday, I expect his confidence that it was a bull was low

I drove up a steep grade with the ol F150 and there was a lot of dust (well thought it was dust) for how slow I was going,,,seems the plastic joint in the heater hose coupling decided to give way,,, ran a bunch of my antifreeze out and steamed up the ol' engine,,, 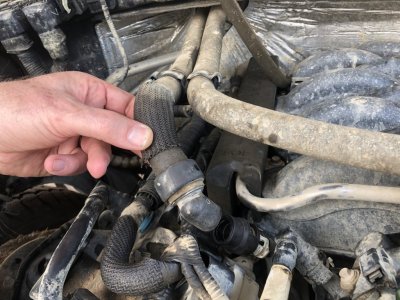 kind of put a crimp on the morning,,, but I hunted a few hours, heard nothing in that area,,, and then limped truck back to camp only going a ways till heat climbed, then shut off engine to allow it to cool,,, only took an hour to get to camp,,,

as mentioned earlier, temps in the high 70s/80s mid day so my bud came back to camp - went to town to get fixin' material for truck,, no proper hose in the one auto parts store in town, so bought improvisation parts,,, got her fixed,, 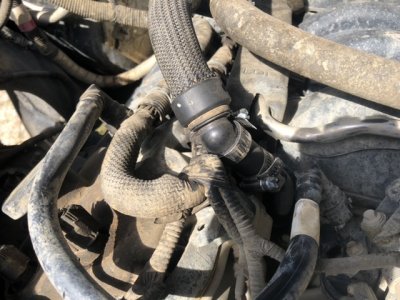 held and is still holding,,, reckon I'll fix it right before next road trip,,,,

Staff member
Contributor
Sunday morning we hunted the area south of our camp, and it proved out,,, heard 4 bulls screaming,,,, TONS of fresh sigh, and NO sign of other hunters,,, the elk were crossing from their feeding/nighttime area on the south slope, over the Continental Divide to the north facing slope,,, classic movement pattern in an area where the closest road or trail was a mile and a half away, and over 1000 feet of elevation below,,,

so we found them where my map recon said they should be,,, the challenge in that area is PEOPLE,,, a major hiking trail runs through the area, there was a surprising amount of traffic on the roads (hunters, sightseers, generally campers, mountain / touring bicycles, BMW touring motorcycles, etc etc),,, Colorado is crowded with "outdoors people"

you had to find a spot where there was NO road/trail access and had the food, cover, and water combo,,,