Headed out in a couple minutes to hunt a small parcel.
Winchester 94AE in hand.
Now, let's see what I can see...

Does a BLR count for the challenge?

Contributor
Think I'm going to drag this old girl out and do some slipping this week.... 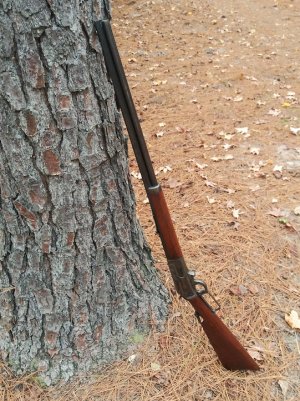 Goin western on em with the model 94

Buffet Trout said:
Does a BLR count for the challenge?
Click to expand...

Yes.
Any lever action at all. 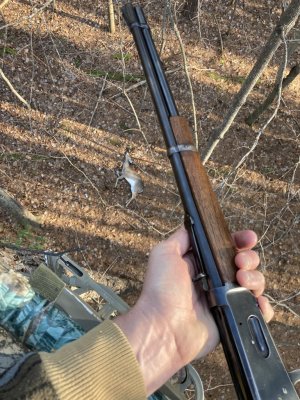 Contributor
Feel like I'm cheating with this rifle, got that lever thingy hanging off the bottom, but shoots like a bolt action, and uses pointed bullets... 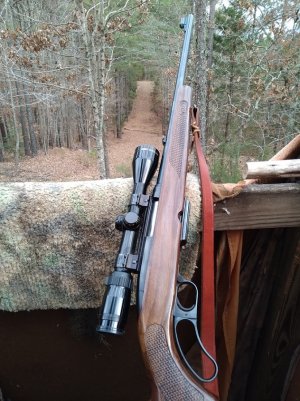 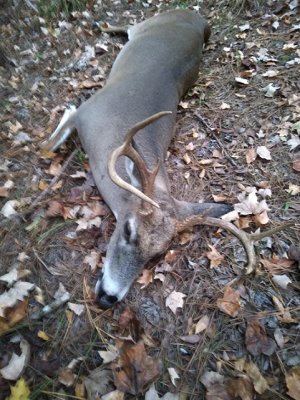 It got western quick!

thank goodness for teenagers. My youngest and a buddy was in the box stand watching the power lines. I went in to the ladder stand next to the creek. This boy was cruising up the other side of the creek when I saw him. I thought I spoked him because I lost sight of him after I sifted around in the stand. Just a couple of seconds later he came from behind the tree, stopped just long enough for me to settle on him and pull the trigger. He fell right there. Spin shot. I got down and got closer and he was trying to gather himself back together and he looked directly at me so I put one directly in his chest.

Now the fun part. I got across and drug him to our side. Then after the boys got back in there from toting our stuff to the truck, the drag started. This is where the teenagers are the best. They took off like nothing. Weightlifting has helped mine. I finally decided to help and I grabbed ahold and I was running trying to keep up. Took him to a friend who told me he needed 3 more.

This is the 1st deer I have killed with one of Daddy's rifle. This is the last rifle that he hunted with on the last day of the season on January 1, 2011.

I have bigger hanging on the board in the building, but I sure this is prettier than them and most likely will get a skull mount done so I'll be able to look at him and remember the good times.

Here's a couple of better pics 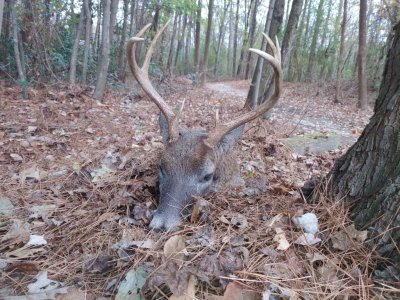 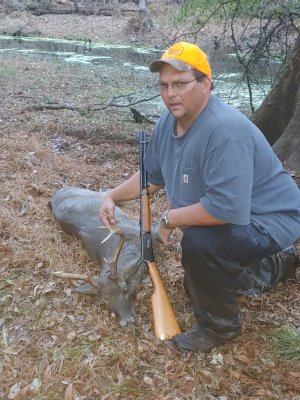 Contributor
Nice job buddy and a lot of great memories for the future. Congrats!

Thats a pretty looking gun and a nice buck! I know that had to be a bitter sweet feeling. Looks like he got wet for you.

Last year for Christmas my grandfather gave me one on his 30/30s that was his sisters husbands gun. The doe I killed was my first with it which was special.

Hunted all morning and most of the afternoon, saw absolutely nothing!! 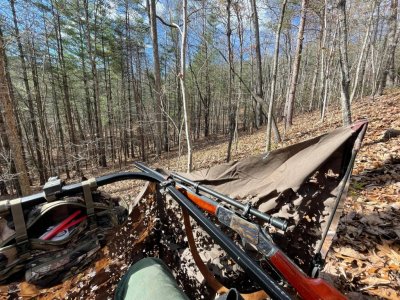 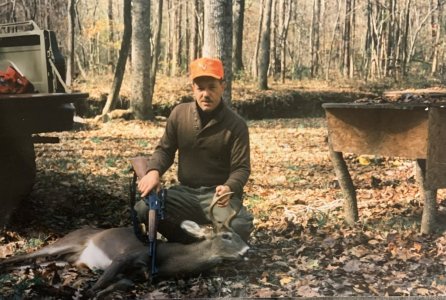 Went out with the Marlin CB in 38-55. Let Wanda the small buck my wife keeps letting walk go. Thought that would be a good idea. 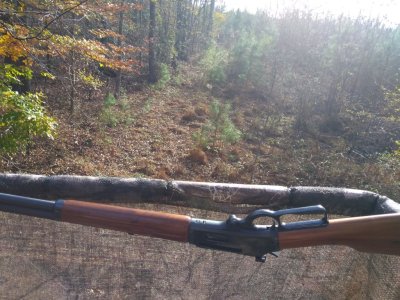 Here is "Wanda" the buck.

Winchester 73' said:
Hunted all morning and most of the afternoon, saw absolutely nothing!!
View attachment 104691
Click to expand...

You may have been like me, and unable to take your eyes off that beautiful rifle!!

stiab said:
You may have been like me, and unable to take your eyes off that beautiful rifle!!
Click to expand...

Thanks. I did get to use it Tuesday but unfortunately my shot was not as true as I thought.

My Great Lever Action Challenge Failure for the year.

What a dang beast!!!! Congratulations!

Thanks man, he just showed up last Friday evening. Had pics of him since then, always with one doe. Luckily that one doe came in Wednesday morning about 7:30

Another buck down with the 30-30. Thank you Lord

Contributor
I'm giving up on the challenge this year. Too many missed opportunities with open sites.
Need to mount a scope on the lever but doubt that will happen this season.

I watched your entire video, and have a few thoughts. First, I applaud your effort at finding the deer, you did all you could. The longest track I have personally made was 325 yards (I paced it off later) on a doe that was liver shot by my son with a .243 A surprising thing I learned from that episode was that the wounded deer did not take the path of least resistance, but actually went up a near vertical bank at least 75 feet high. I would not have believed a healthy deer could have made it straight up that grade, but this mortially wounded one did.

Also, we did not use a dog on that search, but I have many times since and learned that most any dog can be of help, as long as they are comfortable in the woods and not a lap dog. Trained trailing dogs are best of course, but the next day most dogs can go to the scent of a dead deer that is down, and can locate it just by doing 360 degree circles. The important thing is to take the dog to the area, and just watch it, don't lead it.

Sorry for your lost deer, if someone hunts long enough it will happen for sure. It was a good video.

YanceyGreenhorn said:
Another buck down with the 30-30. Thank you Lord
Click to expand...

Best text I got all day brother, way to go Chris !!!

Thank you Scott appreciate you. I been waiting to get one from you about your daughter !

Hunted with this late 80's 336 in 30-30 this afternoon. My brother and I got it for my dad. He never got a deer with it. My son killed a few with it. The 4x Redfield Tracker scope is from the same time frame. I shot a decent 100 yard group with this ammo this afternoon. It was a fluke cause I normally would not be able to shoot a 4x scoped lever 30-30 that good at 100 yards. Two other groups were about 2.5 inches. I'm still pretty happy with it though. 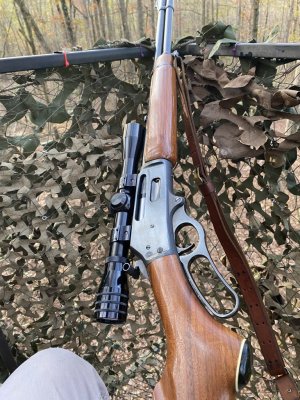 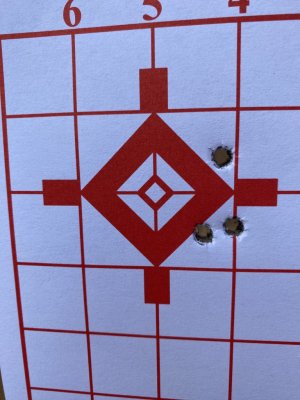 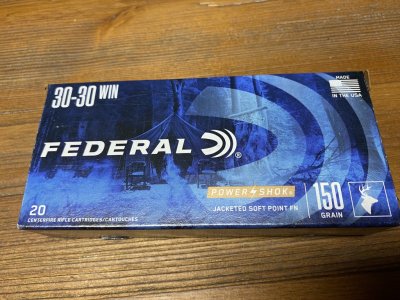 Seeing these pictures made me dig out my Marlin 336 30-30 and pack it for a hunt this coming week. I hope I can share a success picture and story here also.

Contributor
I managed to down a doe with my 1895 Marlin the other day.
I must say… I’m very impressed with the Nosler Ballistic Tip out of the .45/70 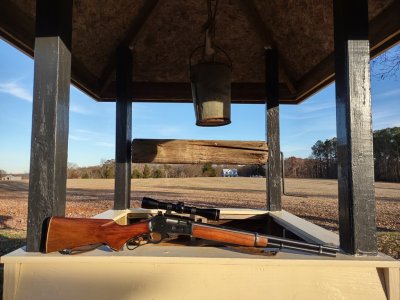 Got one in the rain this morning with the 45/70