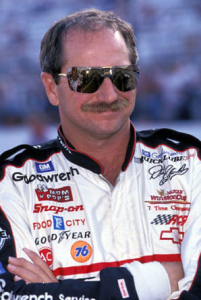 Hard to believe it's been that long. The sport has never recovered IMO. Downhill slide ever since.

He was one of the best. I enjoyed watching him drive.

Buxndiverdux said:
The sport has never recovered IMO. Downhill slide ever since.
Click to expand...

Yeah, seems that NASCAR as most at the time knew it began a steady decline from that day on...

His death was akin to the Patriots, Cowboys, Steelers, Packers, 49ers and Giants franchises all leaving the NFL on the same day...

Contributor
Could you imagine if there was no time left on the clock and Tom Brady throws a hail mary in the endzone of the Super Bowl and the receiver catches it, and while the ball is in the air he collapses and dies. That is basically what happened to Nascar that day...

I never pulled for him. I was a Mark Martin fan, always wanted Mark to finish in front of Dale. I had tons of respect for his abilities. When he was gone, racing was over. Never will be the same.

Hated Earnhardt, but mosty because I grew up a Ford guy. The man could flat out drive. Hate to say it but Kyle Bush is probably the closest thing out there now.

Tim Richmond was the best Driver Nascar ever had.

Contributor
I was a Davey Allison guy. There were two sets of rules. I respect what Dale Sr. won, but if other drivers spun #3 out like he did others, NASCAR would have stepped in & stopped it.

HotSoup said:
Hated Earnhardt, but mosty because I grew up a Ford guy. The man could flat out drive. Hate to say it but Kyle Bush is probably the closest thing out there now.
Click to expand...

I was talking with buddy today. We were both Bill Elliot fans growing up.


Was reading some things on his career and didn’t know how much his dad loathed Chevy. Wouldn’t even take a Chevy trade in on his lot,

Actually had a couple of people call in to work the next day, crazy when you think of it and where i am

Mack in N.C. said:
Tim Richmond was the best Driver Nascar ever had.
Click to expand...

On bias-ply tires for sure. Would have been interesting to see him transition to radials on a type tracks.

Contributor
like him or not, he was an amazing driver.....i shot several tv commercials with him back in the day, he was all business and all about having a great time.....shot the last commercial he ever did at garagema hall........the one where Jr asked if he could borrow his car keys on sunday....the man's generosity and compassion for his community was unparalleled as far as i know........i dont watch nascar any more.....nor, any other pro sports.....the heart is gone.....$$$$$ rules

Couldn’t stand him, he could dish it out but couldn’t take it on the track’and got away with more $hit than any other driver. I was a big Davey Allison fan back then, still am deep down. Imho Earnhardt wouldn’t have been 7 time champ if Davey, Tim Richmond, Rob Moroso or Alan Kulwicki has lived Nevertheless I hate that happened to him.

It’s all “Rich Boy Racing “ now. Those guys drove if you didn’t pay them a dime. They just loved to race.

My father rand I were at that race. I was never a dale fan but I always watched where he was in the race because at the end he was always going to be a factor in the outcome.
I will never forget that day.

Richard Petty said once, and I remember hearing him say it, that "Dale will be a great driver if he don't get killed". Saw him and Petty going at it one time at Darlington believe it was, and Dale passed Richard on the back stretch going into 3rd turn, and Dale had to back off a little as he hit that turn...well, Petty ducked low and passed him back coming out of 4th turn....took him to school that day. Still say he was no match for the likes of Allison, Pearson, Petty, and few others in their day.

Plottdog said:
Those guys drove if you didn’t pay them a dime. They just loved to race.
Click to expand...

So which ones gave up paychecks?

woodmoose said:
So which ones gave up paychecks?


Cole Trickle did, sponsors put money on Rowdy and not the car.
Click to expand...

To put it into perspective, as someone above did so well with the Brady comparison, on 9-11, 9-12 etc, I heard multiple people remark "I'm glad Dale SR wasn't alive to see this".

I DESPISED Dale SR!!! Cheered every time he crashed, including once in front of me in the silver car at the 25th All Star race and I sprayed beer on his car . I was Mark Martin all the way after Davey passed. I even pretended to pull for Jeff Gordon just to tick off the #3 fans in the stands.

This does not equate to I never respected him.

I was attending the 500 every year for a while when he chose to give a winless in GOD knows how many races a ride. That shocked me. On the back stretch when Stewart flipped, I had the camera ready and caught a cool pic. 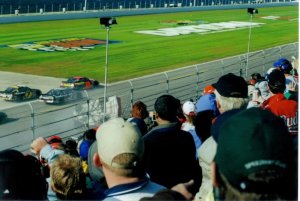 Seeing #3 crash on the opposite side of the track, then slide down below where we could see, seemed awesome! I admit I cheered, because there were folks around me who thought he had a chance to win. We all seemed happy for MW.

Walking out, some the whole crowds mood became different. Elation went to "have they gotten him out of the car yet?" I'm thinking, duh, wasn't that bad of a crash.

Driving home, people started pulling off the freeway, I turned on the radio and we heard a guy on the radio literally weeping, and I became frightened. I pondered if it was Tony Stewart who was in trouble, but the guy on the radio said "loving father". When my wife called me and told me the news, I had to pull over and weep also.

Hating him was a large part of my persona, that had in an instant vanished.

The Intimidator was the absolute best name for him. You can't compare five laps to go on any course, you look in your rear view mirror, and there is the black #3. That exact scenario would absolutely cause GREAT drivers to make mistakes.