Contributor
Did you use the adhesive style?

Yes, Siless 80mil peal and stick. Looks like the same stuff we used to seal missile containers with at work. If its anything close, it'll stick untill Armageddon.

I also found the high speed rattle. There is a steel washer/dust seal between the pinion yolk and the nose of the differential housing. It spins like a madman going down the road. Looks like the internal rubber has rotted away so, until I can get the yolk off the diff, I used adhesive to glue it to the nose of the Diff! Bet it spins again! its so loud I could hear it over the exhaust!

Got other stuff done too. Bolted down the front floor pan. Tightened up more loose body mount bolts, don't know why they backed em all off. Took all but a 1/4" of slack out of the brake pedal. Finalized the routing of the brake switch wiring. Made a heavy leather seal over the hole of the floor where the tranny shifter go's through. The arm slides under it and once the rubber is down and a boot made up, should be fine and keep the water out.

Still gotta snug up the fuel fittings at the carbs and check the tune again. I don't think I have enough all in timing, its 28 degrees at 3000 rpm and dosn't pull real hard when you go to WOT. I'm going to put in 2 more initial and see how it goes. Still gotta grease it but thats next week I think. Also still have a lot of caulking/seam sealing to do under the car. And, I have a heater shut off valve to install, gets hot in there!
Last edited: Jun 20, 2020

Contributor
If memory serves me correct. 28° will not be enough. I'm thinking mid to upper 30's. Not confident of the number right off, but 38 is for some reason is in my mind.

Dizzy brings in 22 at the crank. I'm low overall for sure but damn sure cant hear it knock. I'll sneak it up after the pipes are installed. Straight pipes are too loud. Dont know how the kids can stand it! 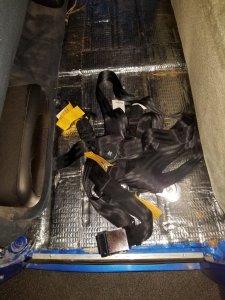 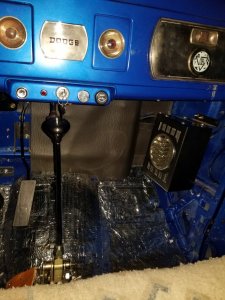 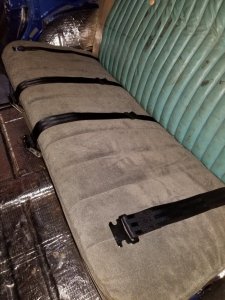 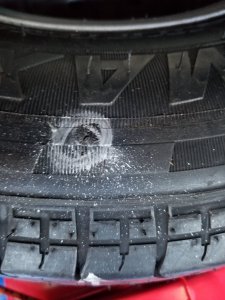 Front belts in, no additional tires murdered completing the job. 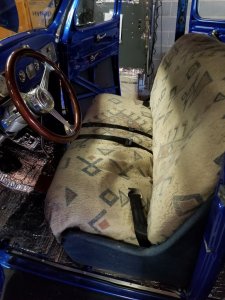 Double plug leaked down but I got the jack and flat spare secured. 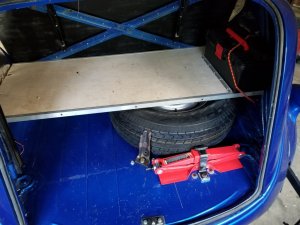 Insulation completed and started making patterns to cut the flooring when it arrives in July.. 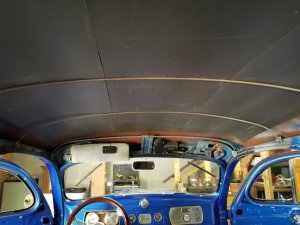 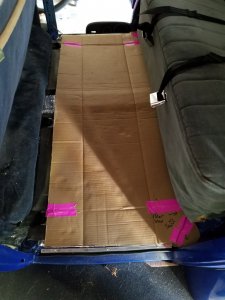 I got asked if I would take Ol Bessy to any Car Shows. The answer is a complex "Maby" and somewhat as follows.

I mostly gave up on shows after doing a 62 impala (300 horse double hump 327/TH350 and 3.31 gear out back, duals, etc. Mild mannered, quick, sleeper.) My last effort at showing, since after years of attendance I discovered that car shows all go about the same regardless of what car you have or how much you spent...

Basically these types of people show up to car shows, not counting the owner/operators of course. Of the 9542 people attending....

1 guy appreciates the car and says so with a complement. (Best complement I received in my life was last week when I was told that Bessy looks like she came out of the factory with the V8 and accessories.)

2 guys appreciate the car but don't say anything, you can tell because they smile and nod at the car.

4 guys ask a question or two and briefly chat about getting a car like that cause grandpa had one exactly like it, Grandpa had a 33 Ford Truck or 41 Nash. (Neither of which is a 37 Dodge but I appreciate the sentiment.)

743 kids bang into it with toys, ice-cream, soda and hot-dogs and those damnable spin up gyro copters {that get purchased at the show to keep the lil rascles from screaming "ITS HOT I WANT TO GO HOME"} that with frightening regularity, land on a car.

984 wives bitch (loudly) that its too hot out and get their damn buggys too close to the car following their husbands in a concerted effort to ensure he can hear them nagging.

1/2 of the remainder are fat grouchy old bass-turds that lean over, in and onto the car whispering "how stupid is this guy he shoulda' done this/that/the other/ruined a great potential car" and all the while their super sized MakDonwalds gut presses an Olympic sized belt buckle into the fenders leaving long scars that they pretend not to notice.

The rest of them just waddle on by without a second look cause its not a Chevelle.....

Went to Good Guys in Raleigh one year. Neat show. Lotsa car guys and gals there. I might go to good guys cause their ain't much 30s stuff being shown now, not in original tin anyhow!

But, by far the best hot rod shows are the local hamburger/pizza/taco stand cruize in's. Great Car Guys and Gals and no Belt Buckle Dudes!

Spent some time today double checking things after I finished the roof insulation and doubling up insulation on the passenger side floor (exhaust side), and rear seat areas.

Found a drip from the front transmission seal. Will probably let it go unless it gets bad. It may stop, but probably not.

Crawled under and ran the entire length of fuel and brake lines. No leaks and the tank is solid in place with no leaks. Time to fill it to the top.

While under I took measurements from known points on the frame to the rear axle, good and pushing straight forward on the parallel leaf springs. Measurements were within 1/16" and I doubt I could get it any better by fiddling any more. I figured there was no need to calculate the thrust angle since its essentially perfect.

Checked all the tie rods, ball joints and rear spring shackles. Naturally the front is new and accepted grease just fine. Lubed them again anyway. The rear shackles were NOS installs in 1986 time frame along with new springs. They had about 2500 miles on them when the wreck ocured and about 30 years of sitting around. I was glad Friday when all 4 took grease left to right and after a 30 mile run today, shot them again with grease. All seems well.

Found a squeek in the running board and temporarily fixed it....permanent fix will be to dismount the front bracket and trim 1/4" off an offending piece of sheet metal that is rubbing the inside bottom edge of the board.

Looked under the car and compared it to photos of factory exhaust. Looks like we can go under the frame as needed. Part will have to be due to battery cables crossing over under the floor from drivers seat box to passenger side starter. Muffler can tuck up under the passenger rear seat area like original. I think we'll run 2.25" aluminized all the way out. Just a single exhaust.

Contributor
You can heat wrap your wiring if the need occurs. Many factory wires are within and inch or so of exhaust components.

I see one that's easy, the clamp on pipe shield. Would work great up front where the wires run overhead. I'll have Tracey put it on the build sheet.

Car runs great. Still loud but I can hear the stereo now with the insulation installed

Contributor
They have wrap or shield. The wrap just goes around the wiring to insulate from heat. Can be compact. The shield takes a bit more space and has to be secured. If I went with that, I'd use rivets...

I think that's about right, and just about time to hit the road.

We had the room, and you can never have too much cooling so....Derale mechanical fan added for back up capacity.

Drive went well until she warmed up. Then I started getting massive deceleration pop and she just wouldn't idle below 1100 rpm. Stalled twice on the way home. So, I assumed fuel or vacuum leak.

Started with the old school stuff you taught me. Smacked the carb good with a screwdriver handle to break loose any trash in the needle, reved it, no change.

Took it out on the road again, punched her pedal hard enough to fully open and close both carbs......perfect. Runs like a top.

Seems the throttle plate on the secondary carb was a touch open. I'll have to get to that during my tuning weekend.

For now, I think she's ready to drive or tow to the exhaust shop.

I feel that. Makes me nervous and jittery. 30 years unfamiliar and she ain't slow any more

Contributor
LOL....... Just hold a steady throttle and be light and slow on acceleration. Back when I had the Gremlin I ran it with open pipes a lot over to South Boston and only got .

Contributor
Dang Rich! I coulda brought some good plugs with me Monday.....

It was on the sidewall. I had a rope plug in it that held but didn't trust it so figgered I'd tube it.

I'llcall ya tomorrow, see what time I should be ready Monday

Ol Bessy was not happy to be on a trailer again. She spit off the straps twice on the trip to the shop. Gotta love her for staying on the trailer dolly though and not taking off on her own. Once we got her on the lift she knew it wasn't another 4 year stint in body shop jail and settled right down. She'll be done Friday or so. Come drive your car!

We are blessed to have such good friends here in NC, BigTen got us there safely and ........Drum Roll...... She is getting her exhaust work done in Wadesboro NC, Gary Porter's Shop (Think Carolina Crusher Monster Truck). I think Mr. Porter is no longer with the business but his employees are and I know she's in good hands. She'll be singing right in no time.

Contributor
You chickened out.

Yep, I'da been stone deaffer in 30 miles than the Army left me in 32 years! 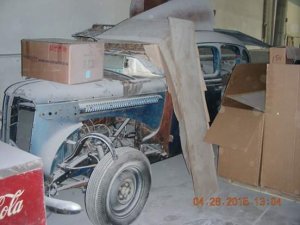