Staff member
Contributor
18 years ago we were attacked and our country went to war. I was working in the S-3X/Special Plans for 3rd Special Forces Group that morning, and was immediately seconded to CENTCOM and SOCCENT to assist with the plan to attack our attackers.

We are still at war with that enemy

The work that many of you do is instrumental in the effort, and for that, I applaud you.

Please, think of those who fell on September 11, 2001 and those who have fallen since. 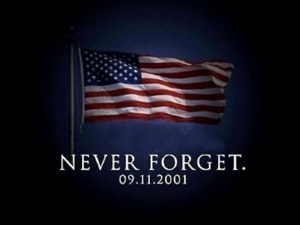 and thank you for your service

I can remember how clear the sky was that day as I was sitting at my house that we were building and talking to my father.

Now it bugs me to see what people are allowing to happen here in this great nation.

Contributor
How is our working relationship with Saudi Arabia and Pakistan now? I had a hunting lease in Alabama near one of the places that these terrorists were training both air and ground attacks , that place was taken down without a whole lot of hoopla...I wonder if anyone even heard of it happening?
There is so much that we as citizens aren't privy too(nor should we be) that is going on behind the scenes to keep us safe, we can't imagine the daily attacks that this country gets, physical and cyber, on it's foundation and it's citizens.
Thanks to all that are in the spotlight, but especially those that are behind the scenes and getting the jobs done...we can't say Thank you enough !!.

I was 10 days from graduating Parris Island. Heard DI’s whispering about the country being attacked and figured it was all part of training. CO gathered the company that night and told us what had happened. Talk about life changing. Spent the next 15 years learning from, working with and training some true American heroes. Say what you will about kids these days, but for the last 18 years they have been raising their right hand to fight. Hell, I just realized writing this that there will be young men and women enlisting this year that weren’t even born yet. Damn how time fly’s.

I had friends up from the States doing some bear hunting, we had just recovered a bear that morning and were sitting having breakfast watching the TV.
Will never forget, will never forgive

I was using my GI Bill going to the local Community College. I walked into the library to do some reports and saw it on TV. I was a little late for my next class. I retired in 92’ and figured it would not be long before it would be wheels up for our troops.

Thank you to all our Brothers and Sisters that keep the fires of Freedom burning. SALUTE

I was 12 and in math class. Our teacher wheeled in a tv and turned it on just before the second plane it. No one including the teachers had any idea really what was happening. We got to leave school the next class and I will never forget seeing my mother sitting in front of the tv crying hysterically. As a small child and to this day it sends a chill up my spine. Thank you to all our current active military/service members and veterans. Y’all are the hero’s of this country!

they have won in europe: full assault here as soon as Trump is out.
sad situation, MSM and left want us to "never remember."
I'm with dobber. 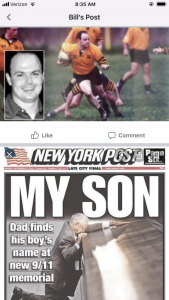 Rob was a great guy. Had his whole future ahead of him, engaged to great girl moving up the ranks in finance.

WoodMoose, I Thank You for your service Sir! And any one else that served as well. I had many friends and people I knew that went right down to the recruiting center in the days following 9.11.01.

Thank all of those that have servered and are currently serving our country, it would not be what it is with out you,
ALWAYS REMEMBER,NEVER FORGET.

never forget. and as stated. thank you and all the great service men and women out there

Thank you WoodMoose and to all others that have served and are currently serving. It is greatly appreciated. Thoughts and prayers to you all.

Thank you to all those who have chosen to stand a watch and those that have laid down their lives to protect this great nation.

It is sad to think about how far we have shifted as a country in such a "short" time.

" Some people did some things"- Ilhan Omar

Contributor
I was in high school. My dad was supposed to fly in the afternoon, his plane was grounded thankfully. I remember my mom coming to get my sister and I because she was afraid the schools could be hit. That's one of the only times in my life that I saw fear in my mother's eyes. I'll never forget. The Lord asks us to forgive but it sure is hard.

Contributor
9/11 was the start of the modern era of the war on terror, but terrorism has been a fact of life for America since before the 1960's.

On this day, we rightly remember and honor the victims of 9/11, pay tribute to those who have taken the fight to the enemy, and honor the servicemen and first responders who made the ultimate sacrifice.

Remember the Beirut bombing of our Marine barracks in 1983.

Remember the Kenyan embassy bombing in 1998.

Remember the attack on USS COLE in 2000.

Sadly, the list is too long. The point is, the war on terrorism is a generational one. It's been going on since long before Yasser Arafat & Qaddaffi were headlines, and our children will be fighting it in the decades to come.

Contributor
I wonder if those rag head camel humpers ever regret attacking the United States?
My dad always told me that a pissed off 19 to 20 yr old American soldier is a mean ass SOB.?
Thanks to all the men and women who have protected us since 9 / 11 / 2001.

aya28ga said:
9/11 was the start of the modern era of the war on terror, but terrorism has been a fact of life for America since before the 1960's.

On this day, we rightly remember and honor the victims of 9/11, pay tribute to those who have taken the fight to the enemy, and honor the servicemen and first responders who made the ultimate sacrifice.

Remember the Beirut bombing of our Marine barracks in 1983.

Remember the Kenyan embassy bombing in 1998.

Remember the attack on USS COLE in 2000.

Sadly, the list is too long. The point is, the war on terrorism is a generational one. It's been going on since long before Yasser Arafat & Qaddaffi were headlines, and our children will be fighting it in the decades to come.

You are correct Sir,,,I served from 1979 to 2006 and most of that was spent fighting terrorists,,,,mostly islamic terrorists,,,,you left out the Iranian hostage taking,,,,and many others,,,

what folks who fixate on Iraq and Afghanistan forget is that we have been fighting for a long, long time

Contributor
After a year or so in the military, I wanted a painful reminder/tribute of/to why I joined. Even 11 years after getting my rib cage covered with the Towers billowing smoke, I look at it a couple times a day and remember those lost in the attack, and all the other men and women who've answered the call past, present and will in the future.

Thank you all for your service!

I was 17 when the news broke while I was in Spanish class. When the bell rung I remember walking out of the wing the classroom was in to go back to the main building. I looked up at the flag and it just laid limp. It was eerily quiet and I realized the usually busy road in front of school didn't have any traffic. We were dismissed from school early and football practice was canceled. I remember walking in the front door and seeing Dad was already home standing in the living room, it was then when I saw on TV that the second tower collapsed.

My Dad was really somber and wasn't saying much but the only thing I remember him saying is, "We are going to war and I'm glad you can't go."

It was a real race to the bottom between CNN and The New York Times on Wednesday to see which could have the most God-awful hot take on the eighteenth anniversary of the 9/11 attacks.

I was working from home. A coworker called and told me to turn on the tv.

Turns out my ex wife’s cousin was there. He worked in the next building (I think it was called building 9) and was just getting to work. He saw it all including the jumpers. Family couldn’t find him for close to 24 hours. He was shell shocked. Took the wrong train home. It was a mess. He still has PTSD.

ellwoodjake said:
" Some people did some things"- Ilhan Omar
Click to expand...